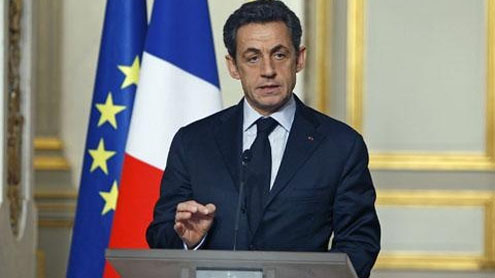 Nicolas Sarkozy has unveiled his economic manifesto for re-election as president of France, less than three weeks before the first round of voting.

He promised spending cuts and a new law committing France to balanced budgets.Opinion polls suggest he has edged ahead of his main rival, Francois Hollande, but the Socialist still seems likely to win the second round.Mr Sarkozy has seen his support strengthen since an Islamist gunman attacked soldiers and a Jewish school.But now attention is moving to the economy and Mr Sarkozy promised greater stability.

“I want to say that in 2016 that France must have a balanced budget. I emphasise, a balanced budget is the golden rule for our citizens. I will vote it in from summer 2012. This golden rule is to be adopted by all our European partners – whether they are of the left or of the right,” he said.The French president said he expects the country’s public debt to peak at 89.4% of Gross Domestic Product (GDP) in 2013 before falling back to 80.2% in 2017.That compares to debt levels of 159% of GDP in Greece and 81.8% of GDP in Germany in the final quarter of last year, according to statistics from the European Commission.

Mr Sarkozy also promised to freeze France’s contributions to the European Union budget, saving 600m euros ($790m; £497m) annually.And he added: “I won’t go back on on the proposals I made on the fiscalisation of dividends, minimum taxes for big businesses and taxing tax exiles, withdrawing working tax credit (a state subsidy for the low paid) which will bring in 8bn euros ($10bn; £6.5bn) to the state’s budget.”

His Socialist rival Mr Hollande supports higher taxes on the rich. On Wednesday he promised a freeze on fuel prices and a 30% cut in salaries for the president and cabinet ministers. After the gun attacks in the south-west last month, Mr Sarkozy ordered a security clampdown and there have been high-profile and controversial raids on suspected Islamist militants.

This week, France expelled two foreign-born radical Islamists on state security grounds.However, opinion polls suggest unemployment – running at 10% – tops voter concerns.According to the three most recent opinion polls available, Mr Sarkozy leads Mr Hollande by an average of 1.8 percentage points in the first round but trails him in the second by an average of seven points.Voters first go to the polls on 22 April, with the run-off scheduled for 6 May. – BBC