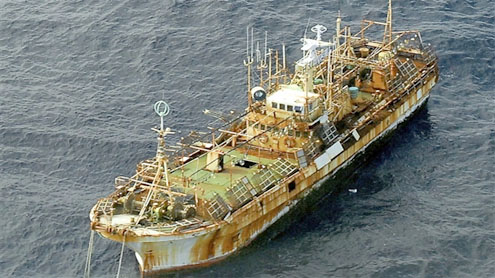 The US Coast Guard has used cannon to sink a crewless Japanese ship that drifted to Alaska after the 2011 tsunami.

The coast guard earlier said they would hold off scuttling the Ryou-Un Maru after a Canadian fishing boat claimed salvage rights.But a Canadian official later said that the Bernice C had been unable to tow the 200ft (61m) Japanese “ghost ship”.The boat had no lights or power and was viewed as a danger to other ships.It was thought to be at the vanguard of a stream of tsunami debris that has been drifting east since last year’s disaster hit Japan.
Owner contacted

The Ryou-Un Maru was first spotted off the coast of Canadian British Columbia on 23 March.The vessel was moving at about 1km/h in a maritime transport corridor that separates US and Canadian waters.It was adrift about 195 miles from Sitka, Alaska, when it was sunk, officials said.Chief Petty Officer Kip Wadlow told AP news agency that a cutter was used to fire cannon at the abandoned ship, which burst into flames and took on water.

After a few hours, larger ammunition was used to complete the job, he said.A Hercules C-130 air crew was ready to participate in the operation, broadcasting to mariners and air traffic to alert them and help clear the surrounding area before the demolition of the ship began.CPO Wadlow said it would be too expensive to try to salvage the ship, and too dangerous to put anyone on board.

The ship may have carried more than 7,500 litres of diesel fuel, officials said.The Ryou-Un Maru, a shrimping boat, has been traced to the Japanese island of Hokkaido.Alaskan Senator Mark Begich suggested that the boat’s owner had been identified, but the owner did not want the vessel back.On 11 March 2011, a 9.0-magnitude earthquake hit Japan, triggering a tsunami that swamped a power station, prompting the worst nuclear crisis since the 1986 Chernobyl disaster. – BBC