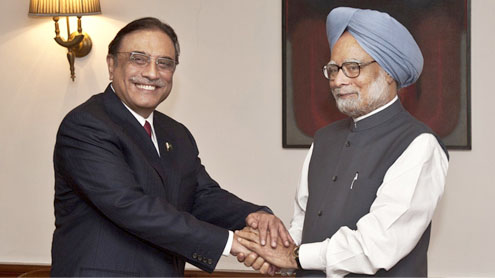 NEW DELHI: While Prime Minister Manmohan Singh raised the issue of terrorism and the need to expedite the trial of Mumbai attacks accused with Pakistani President Asif Ali Zardari, government sources said Zardari focused on Kashmir, Sir Creek and Siachen issues saying it was high time these were resolved.

That Zardari managed to raise these issues focusing on their early settlement, even though he did not give any categorical assurance on either reining in India-specific terror groups or handing over LeT chief Hafiz Saeed to India, is likely to help him cater to his domestic constituency of which many had demanded until Saturday that he call off his visit. “Both felt that we need to move forward step-by-step,” foreign secretary Ranjan Mathai said.

While Zardari was expected to mention Kashmir to allay fears in Pakistan that its government was ignoring this “core issue” as it rebuilds ties with India, the president also took up Sir Creek and Siachen saying these issues could be solved in quick time with the two countries narrowing down the trust deficit.Both leaders mourned the fact that more than 100 Pakistani soldiers had gone missing after an avalanche at Siachen.

After the path-breaking meet between Singh and his Pakistani counterpart Yousuf Raza Gilani in 2010, the defence secretaries resumed dialogue on Siachen last year but despite the two sides agreeing to demilitarize the glacier, things have not moved forward.India insists that Pakistan recognize and authenticate the Actual Ground Position Line passing through Soltoro Ridge and Siachen. It believes that the ceasefire line travels northward from where the current demarcation ends. Pakistan, however, insists that the line from this point moves in the north-east direction towards Karakoram Pass.

The two countries last year also resumed dialogue after a gap of four years on delimitation of the disputed maritime boundary at the Sir Creek estuary, separating Gujarat from Sindh, which is rich in oil and gas. Pakistan complained to the UN in December 2011, that the geographical coordinates notified by India of the estuary were “inconsistent” with international law and “impinge” upon Islamabad’s territorial limits in the disputed area. – TOI