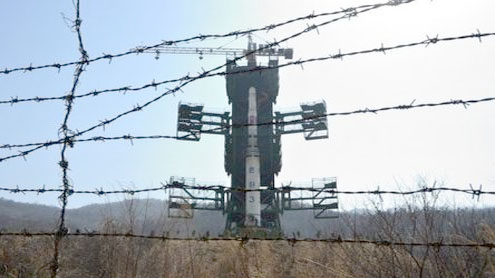 PYONGYANG: North Korea is counting down to the 100th anniversary of its founder’s birth, with top-level meetings and a controversial rocket launch scheduled in coming days to bolster his grandson’s credentials.

The secretive state, in an unprecedented move, on Sunday invited foreign journalists to its rocket launch site to try to persuade the world of its peaceful intentions.The United States and other nations said the satellite launch will be a pretext for a ballistic missile test, in defiance of United Nations resolutions and a US-North Korean deal.A South Korean official said the North appeared to be preparing to follow up the launch, which is scheduled for sometime between April 12 and 16, with a third nuclear weapons test.

But Jang Myong-Jin, head of North Korea’s Tongchang-ri space centre in the far northwest, said it was “really nonsense” to call the upcoming launch a disguised missile test.”This launch was planned long ago, on the occasion of the 100th birthday of (founding) president Kim Il-Sung. We are not doing it for provocative purposes,” he told journalists Sunday.The rocket, painted white with sky-blue lettering, is 30 metres (99 feet) high with a diameter of 2.5 metres.

Reporters also saw close-up what officials said was the satellite: a 100-kilogram (220 pound) box with five antennae, covered by solar panels to supply it with electricity.The Kwangmyongsong-3 (Shining Star) satellite will collect data on forests and natural resources in impoverished but nuclear-armed North Korea, officials said.A successful mission would burnish the credentials of the young and untested Kim Jong-Un as a strong leader.In the country’s second dynastic succession, Jong-Un took over from his father and longtime ruler Kim Jong-Il, who died last December. He has so far formally taken over just one of his father’s posts, head of the 1.2 million-strong military.

The ruling party will Wednesday hold a rare special meeting expected to appoint Jong-Un as party general secretary in place of his late father.On Friday the legislature will convene. It could appoint Jong-Un chairman of the all-powerful National Defence Commission or bestow some new title.On Sunday’s centenary of the birth of Kim Il-Sung who died in 1994 and bequeathed power to his son Kim Jong-Il hundreds of thousands are expected to take to the streets of the showpiece capital Pyongyang.Thousands have been rehearsing for the celebrations or visiting the founding president’s birthplace in the village of Mangyongdae just outside the capital.

“We are very happy to have Comrade Kim Jong-Un as the new supreme leader of our people and country,” Mangyongdae visitor Ryu Jin, 48, told AFP.”We will advance united around Comrade Kim Jong-Un, as we have always done.”The rocket launch has, however, sparked regional alarm including from China, North Korea’s diplomatic and economic patron. On Saturday Japan deployed missile batteries in central Tokyo.Prime Minister Yoshihiko Noda has given the green light to shoot down the rocket if it threatens Japan’s territory and South Korea promises similar action if necessary.

China’s Foreign Minister Yang Jiechi, in a meeting with his South Korean and Japanese counterparts on Sunday, said Beijing was “worried” by the rocket launch, according to a foreign ministry statement.The North says it can destroy the rocket remotely if it veers off course.It insists the launch will not breach a February deal, under which it agreed a partial nuclear freeze and a missile and nuclear test moratorium in return for 240,000 tonnes of US food aid.

The US has suspended its planned shipments to the North, where severe food shortages have persisted since a 1990s famine. A pro-Pyongyang newspaper last week hinted there could be another nuclear test in response.The North, believed to have enough plutonium for six to eight bombs, tested atomic weapons in October 2006 and May 2009. Both were held one to three months after missile tests.Preparations are under way in the north-eastern town of Punggye-ri, where the two previous nuclear tests were carried out, a South Korean official in Seoul told AFP Sunday on condition of anonymity.”Recent satellite images led us to conclude the North has been secretly digging a new underground tunnel in the nuclear test site besides two others where the previous tests were conducted,” said the Reuters. – Brecorder

Gilani for regional stability through trade

Gilani for regional stability through trade