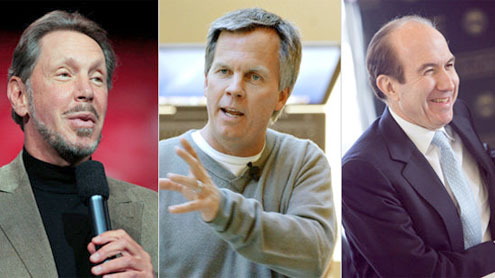 At Apple, the answer to that question is an emphatic yes. Not since Steve Jobs has a chief executive at Apple, or any other public American corporation, for that matter, been as richly rewarded in stock as Timothy D Cook, who succeeded Jobs last August, a few months before Jobs died.Cook was paid a cash salary of roughly $900,000 in 2011. On its own, that would have been a ho-hum paycheck for a top American CEO in recent years. But then came a wild extra, a one-time award, in the form of Apple stock. It was initially worth $376.2 million. As of the end of last week, it was valued at roughly $634 million, reflecting Apple’s soaring share price.

And, at a time when some investors seethe over far smaller paychecks, a vast majority of Apple shareholders voted in favour of Cook’s reward.Of course, most of us can’t begin to wrap our heads around pay figures like these. An American with a bachelor’s degree typically makes $2.3 million, not in a year, but over a lifetime, according to a study from Georgetown University. After the ups and downs of the boom-bust years, pay among the 100 top CEOs at big US corporations held fairly steady in 2011, according to Equilar, which reviewed CEO compensation for The New York Times.

The median CEO in this group took home $14.4 million – compared with the average annual US salary of $45,230. In all, the combined compensation of these 100 CEOs totalled $2.1 billion.But the CEO wealth is hardly trickling down. During the 2010 recovery, the top 1% captured 93% of the income gains, while the incomes of the 99% essentially remained flat, according to a study by Emmanuel Saez, an economics professor at the University of California, Berkeley.

In 2011, the median weekly earnings for full-time wage and salary workers in the US rose only about 1%, to $756, from $747 in 2010, according to data from the Bureau of Labor Statistics. In constant dollars, wages fell a little more than 2%.The C-suite and the shop floor have never been further apart, said Brandon Rees, the deputy director of the AFL-CIO office of investment . “American workers are having to make do with less,” Rees said, “while CEOs have never had it better.”  – TOI