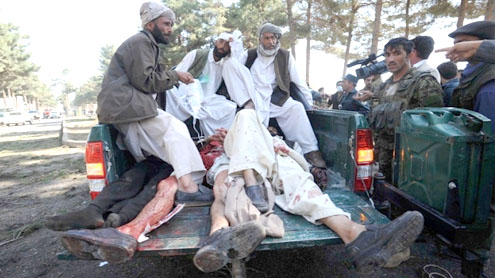 KABUL: Suicide bombers struck two government offices in southern and western Afghanistan on Tuesday, killing 15 people as militants step up attacks across the country with the arrival of spring temperatures, authorities said.

Four policemen were killed at the local police office in the Musa Qala district of Helmand province in the south. Another three policemen and eight civilians died in a large blast in Herat province in western Afghanistan.The Taleban claimed responsibility for both attacks.Militants have been targeting Afghan and NATO security forces as they fight to assert their power and undermine US efforts to try to build up Afghan forces. Afghanistan’s police and army are increasingly shouldering the job of providing security with the planned exit of most foreign combat troops by the end of 2014.

In Helmand, three suicide attackers wearing vests laden with explosives parked their car outside the police office and walked toward the entrance, said Daud Ahmadi, a provincial spokesman.Police fired at the attackers, killing one. Two others blew themselves up inside the compound, Ahmadi said. He initially reported that eight policemen died but later revised the toll, saying that four policemen were killed and five, including the district commander, were wounded.Earlier in the day, a group of suicide bombers blew up their truck outside the Guzara district office in Herat province.

Two men and a woman wearing a burqa were found dead inside the vehicle that exploded at the gate of the district building where people were waiting to go inside to see government officials about various business matters.Raouf Ahmedi, a spokesman for the police commander of the western region of Afghanistan, said police in the area had received a tip that the black four-wheel-drive vehicle was loaded with explosives.”They were chasing the car and tried to stop it,” Ahmedi said. “The vehicle then turned toward the district headquarters building and tried to pass the checkpoint, but police stopped them to be searched and asked where they were going.” Moments later the vehicle exploded, causing a loud boom that could be heard a few miles away.

“The explosion was so strong — there are casualties among police and civilians,” said Nasar Ahmad Popul, the chief of the province’s Guzara district who was inside the headquarters at the time of the blast.Ahmedi said 11 people were killed — three policemen who were guarding the district building and seven civilians.Twenty-two others were wounded, including children, he said.Barriers at the blast site were blackened and investigators examined charred remains of what was left of the vehicle. Several of the wounded were loaded into the back of police pickup trucks and taken to a hospital. Rescue workers wrapped those killed in white sheets and carried them from the site.

Herat province, as well as most of western Afghanistan, is relatively calm as insurgents have concentrated their attacks in the country’s south and east. The responsibility for nearly all of Herat province has been transferred, or is in the process of being transferred, from NATO troops to Afghan forces.Tuesday’s attack occurred between Herat city, the provincial capital, and the main airport in the area, which is located in Guzara district. – Arabnews