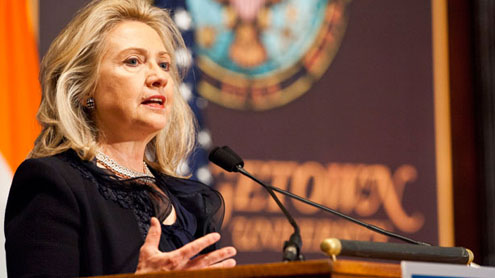 ANNAPOLIS : US Secretary of State Hillary Clinton warned on Tuesday that history points to “additional provocations” from North Korea after its expected rocket launch this week, suggesting isolated Pyongyang feared closer relations with the outside world.

In a wide-ranging speech on US. policy toward the Asia-Pacific region, Clinton also called on China to embrace and participate more in regional security efforts and to address the problem of cyber theft of intellectual property.North Korea’s proposed long-range rocket launch would breach U.N. sanctions imposed to stop the country developing a missile that could carry a nuclear warhead.North Korea’s decision to launch what it calls a weather satellite but which others see as an advanced missile “raises questions about Pyongyang’s seriousness in saying that it desires to improve relations with us and its neighbors,” she said.

“This launch will give credence to the view that North Korean leaders see improved relations with the outside world as a threat to their system. And recent history strongly suggests that additional provocations may follow,” Clinton said a speech to cadets at the US. Naval Academy in Annapolis, Maryland.Clinton contrasted Pyongyang’s provocative stance with developments in Myanmar, where long-jailed Nobel Peace Prize winner Aung San Suu Kyi was voted into parliament this month as part of a cautious reform and opening to the outside world by a country that had for decades been as reclusive as North Korea.

“It is still too early to say how this story will end,” said Clinton, who is preparing to send the first US. ambassador to the country, also known as Burma, in decades.Clinton dismissed talk of a new Cold War in Asia between the United States and China, saying that the two powers have since the 1970s “gone from being two nations with hardly any ties to speak of, to being thoroughly, inescapably interdependent.”

Addressing frequent allegations from some quarters in China that the United States is trying to thwart China’s ambitions in Asia and beyond, Clinton said “a thriving China is good for America, and a thriving America is good for China.””We will only succeed in building a peaceful, prosperous Asia-Pacific if we succeed in building an effective US.-China relationship,” she added.The United States and China “are also working hard to reduce the risk of miscalculation or miscues between the American and Chinese militaries and forge a durable military-to-military relationship,” said Clinton.

US. efforts to built up the security architecture and institutions in the Asia-Pacific region was not a secret strategy “for protecting Western prerogatives and denying rising powers their fair share of influence” or “trying to draw them into a rigged system,” Clinton insisted.”Fundamental freedoms and human dignity; an open, free, transparent, and fair economic system; the peaceful resolution of disputes and respect for the territorial integrity of states; these are norms that benefit everyone and that help all people and nations live and trade in peace,” she said.

Emerging powers such as China, India and Indonesia “have benefited from the security it provides, the markets it opens, and the trust it fosters,” Clinton said of the Asia-Pacific system forged by the United States and its allies.”As a consequence, they have a real stake in the success of that system,” she said.Clinton, shifting from broad regional policy comments, told the cadets the United States was “increasingly concerned about the growing threat to our economic and national security posed by cyber intrusions, particularly the theft of intellectual property via cyber means.”Without directly accusing China, thought by most experts to be the chief source of cyber intrusions, she said it was critical for Washington and Beijing to establish “clear and acceptable practices in cyberspace.” – TOI