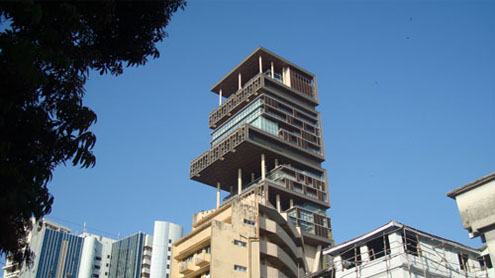 MUMBAI: The Maharashtra government on Tuesday ordered a probe by an officer of the rank of a secretary into an alleged unauthorized construction carried out on a footpath as part of the extension of Mukesh Ambani’s 27-storey home, Antilia.

The probe will also look into allegations of ‘generosity’ shown by the civic body while legalizing work adjoining the billion-dollar structure ”at the cost of public convenience”. But senior civic officials said the controversy was being blown out of proportion and was in fact resolved at a meeting between BMC commissioner Subodh Kumar and Ambani late last year.The probe was ordered by state urban development minister Bhaskar Jadhav after allegations in the legislative assembly that the state government was trying to shield Ambani and shrugging off its responsibility. Without committing on a time-frame, Jadhav said: “If investigations prove that illegal work did take place on the setback plot, we will take action and remove the contentious portions.”

The Ambani group had in May 2010 handed over 309.31 sq m of road setback to the corporation in lieu of additional floor space index (FSI), which it consumed in due course. The setback was sought to widen the 18.30m-wide Altamount Road. But in the absence of a setback at an adjoining Bank of India building and the presence of large trees on the land, the corporation did not proceed with the widening. In the meantime, Antilia carried out ‘illegal’ beautification on the setback, including laying out a lawn, constructing a bund wall, a staircase and a security cabin. On receiving a complaint, the civic body served a notice under section 314 of the BMC Act on December 14, 2010.

At a meeting between Ambani and Kumar, it was decided that since the BMC could not put the area to good use, it be handed over to Antilia Commercial Pvt Ltd for beautification on the condition that the civic body could cancel the allotment ”on its discretion”. But doubts were raised at corporation meetings over the allotment which was made despite there being no policy for handing over setback land back to the owner. “Doubts were raised even by senior civic officials, including statutory committee members. The state government must clarify how the setback was allotted to Ambani and unauthorized work legalized conveniently,” said Eknath Khadse, leader of the opposition in the assembly.

On being served a notice, the Antilia management clarified that it had constructed a security wall to prevent public car parking in front of two gates of the building, and the grass was planted as a minor beautification measure. It was decided at the Ambani-Kumar meeting that the civic body would levy Rs 2.82 lakh as ‘pay and park charges’ and another 1.7 lakh as rent every year. “What is the harm if we get Rs 5 lakh every year for land which is of no use to us in the near future? Once we get the remaining setback on this road, the land will be taken back and put to use,” said a senior civic official.The Ambani residence was earlier in the news over allegations that it was constructed on Waqf board land reserved for the poor. – TOI