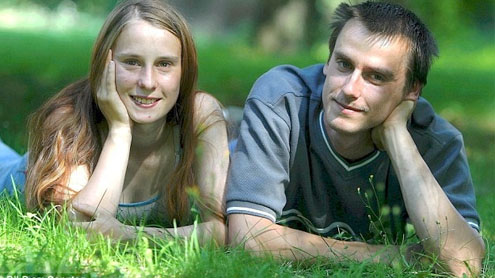 A brother and sister from Germany who had an incestuous relationship, arguing they had the right to a family life, have lost their European court case.

Patrick Stuebing and Susan Karolewski had four children together, two of whom are described as disabled.The European Court of Human Rights said Germany was entitled to ban incest.Stuebing, who was convicted of incest and spent three years in prison, did not meet his natural sister until he tracked down his family as an adult.He had been adopted as a child and only made contact with his natural relatives in his 20s.

The siblings grew close after their mother died.Three of their four children are now looked after in care.The couple insist that their love is no different to any other.The law against incest is based partly on the increased likelihood of disabled children being produced by the union.Two of the couple’s children do have disabilities.

However, their lawyer argued that there is also a greater risk when disabled people have children, or with older women, but such circumstances are not banned.Stuebing claimed his rights to private and family life had been violated.But the European Court of Human Rights (ECHR) said the German prohibition of incest for brothers and sisters does not violate the fundamental right to protection of family life.It noted that German courts did not convict Stuebing’s sister because she has a personality disorder and was “only partially liable” for her actions. – BBC