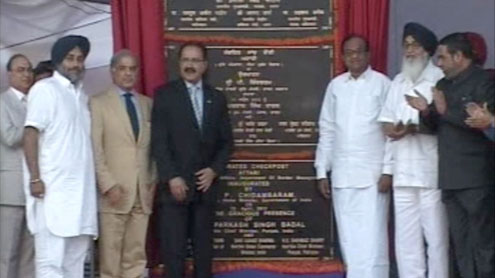 Indian Punjab Chief Minister Parkash Singh Badal described the ICP a gateway for both the countries to prosperity, peace and mutual brotherhood.Chidambaram strongly endorsed Badal’s demand to allow import and export of all goods manufactured in the two countries instead of restricting it to only 137 items.Addressing the gathering, Chidambaram said that this was a historic day as India had opened its gateway of trade and prosperity to Central Asian countries that was bound to increase Indo-Pak trade four-folds. He said that it was first of the 13 ICPs to be constructed on the border of Pakistan, Bangladesh and Nepal and assured that he would come back within two weeks to review whether teething problems of this ICP had been sorted out or not.

Pakistani Punjab Chief Minister Shahbaz Sharif emphasised the need for greater political will. He said that both countries would have to rise above past bitter experience and work together for economic integration. Shahbaz said that instead of circular route for importing goods through Mumbai-Dubai-Karachi or Karachi-Singapore-Mumbai both countries needed to trade through Attari.

The Indian Punjab CM called upon the governments of India and Pakistan to take initiatives to make the Indo-Pak border soft, secure and peaceful to give boost to the present relatively sluggish economic performance in the region. He said from today onwards this historic day of Baisakhi would also be remembered as ‘Red Letter Day’ in the history of Indo-Pak relations with the opening of the ICP.Badal also requested the Pakistani government to accord ‘most favoured nation’ status to India as the latter had already granted the same status to Pakistan. He said that the ICP would open new vista of trade, as it would be India’s gateway to Afghanistan and Central Asia.

Pakistani Commerce Minister Amin Fahim said that with the inauguration of the ICP a new era of economic prosperity would herald in the region, which would go a long way in removing poverty and unemployment faced by both countries. He said 2012 was proving collaborative between both countries, especially with reference to trade promotion. “I hope this one year would be extended further.” He said that promotion of positive ties between Pakistan and India would bear fruit of happiness and prosperity for the people living on both sides of the border.

Indian Commerce Minister Anand Sharma insisted that Pakistan should consider allowing export of all those items through ICP Attari that were being allowed through Mumbai port. He said that it would be a win-win situation for both the countries, as both the sides would be largely benefited from these trade ties. He said that to further cement the economic ties between both the nations multiple visas for the traders of both the countries validating up to one year would be soon issued by both the governments. The Indian government is constructing ICPs during the 11th five-year plan.

In the initial phase, 13 ICPs have been envisaged at major designated entry/exit points along India’s international border. Seven ICPs will be constructed in Phase 1 and 6 ICPs in Phase 2. ICP Attari is the first to be completed and 4 ICPs (Raxaul, Jogbani in Bihar, Agartala in Tripura and Petrapole in West Bengal) are in various stages of construction.Attari ICP has 16 immigration counters and 12 customer counters on arrival and departure sides of the passenger terminal building. – PT