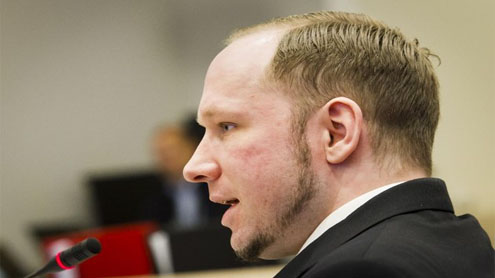 Norway: Anders Behring Breivik knew it would take practice to be able to slaughter dozens of people before being shot by police. In a chilling account, the far-right fanatic claimed that he sharpened his aim by playing the video game “Call of Duty: Modern Warfare” for hours on end.

Breivik told an Oslo court on Thursday he also took steroids to build physical strength and meditated to “de-emotionalize” himself before the bombing and shooting rampage that left 77 people dead. He figured he had no more than a 5 percent chance of not being killed by police.His lack of remorse and matter-of-fact description of weapons and tactics — he even considered using a flame thrower — were deeply disturbing to families of the victims, most of whom were teenagers.”They perceive him as evil and dangerous and reopening wounds,” said Mette Yvonne Larsen, a lawyer representing the bereaved.

“It’s one thing to read explanations, it’s quite another to hear a person present such a message,” Larsen said. “I am personally quite shocked.”Breivik testified that he prepared for his attacks by cutting off contact with the outside world and devoting himself to video games. He said he played “World of Warcraft” for 16 hours a day while living with his mother in 2006 and, starting in January 2010, played “Call of Duty: Modern Warfare,” primarily to get a feel for how to use rifle sights.

Christopher Ferguson, a clinical psychologist at Texas A&M International University, said that although some research suggests action games can improve “visuospatial cognition,” it’s difficult to say whether Breivik could have improved his accuracy by playing “Modern Warfare.””Let us keep in mind too that he was shooting kids on an island from which they could not escape easily,” said Ferguson, whose research involves the impact of violent video games on behavior. “That does not require great accuracy.”And while the belief persists of a link between violent video games and violent behavior, studies have shown that is not the case, he said.

Norway has been roiled by the trial since it began Monday. The public TV network NRK is broadcasting live from court but isn’t allowed to show Breivik’s testimony.Pictures of the confessed mass killer, smirking or flashing his clenched-fist salute, have filled newspaper front pages. For readers who’ve had enough of his antics, the Dagbladet newspaper website has posted a link to a Breivik-free edition.But many say finding out what motivated Breivik is crucial for the country to put the July 22 massacre behind it.

“We should consider ourselves lucky to have this trial to uncover his thoughts and values,” said Oeystein Stoltenberg, a 59-year-old Oslo resident.Breivik, who styles himself as a modern-day crusader, has confessed to the attacks but rejects criminal guilt, saying he was acting to protect Norway and Europe by targeting a left-leaning political party that he claims betrayed the country by opening it up to “Islamic colonization.”

Since Breivik has admitted to the bombing that killed eight people in Oslo and the shooting massacre that left 69 dead at a Labor Party youth camp on Utoya island, the key issue is to establish whether he is criminally insane.For the first time since the trial started, Breivik didn’t give his right-wing salute when he entered the courtroom Thursday, heeding the advice of his lawyer. But those who were hoping for signs of regret were disappointed.The 33-year-old Norwegian showed no emotion as he once again described his victims as “traitors” for their links to Norway’s governing Labor Party.

“Militant nationalists are split in two,” Breivik said. “One half says you should attack Muslims and minorities. The other half says you should attack elites, those who are responsible.”The government building he tried to blow up was “the most attractive political target in all of Norway,” he said, adding that he was disappointed to hear on the radio as he drove to the youth camp that the building didn’t collapse.Breivik said he had planned to capture and decapitate former Norwegian Prime Minister Gro Harlem Brundtland, then post a video of the beheading on the Internet, but she had left Utoya before he arrived.

The self-styled anti-Islamic militant said he was inspired by al-Qaida’s use of decapitation, but noted that “beheading is a traditional European death penalty.””It was meant to be used as a very powerful psychological weapon,” he said.Brundtland’s adviser, Jon Moerland, told The Associated Press she would have no comment about Breivik’s claim. A Labor Party prime minister for 10 years, Brundtland later headed the World Health Organization and was appointed as a U.N. climate change envoy in 2007.

Breivik said his original plans were to set off three bombs in Oslo, including at the royal palace, but building just one fertilizer bomb turned out to be “much more difficult than I thought.”His preferred targets for the shooting massacre were an annual conference of Norwegian journalists or the Labor Party’s annual meeting. But he couldn’t get prepared in time, so he decided to strike the summer retreat of the Labor Party’s youth wing.Breivik said he had expected to be confronted by police when he left Oslo for Utoya island, armed with a handgun and a rifle — both named after Norse gods.

“I estimated the chances of survival as less than 5 percent,” he said.During his testimony, Breivik calmly answered questions from prosecutors, except when they asked about the alleged anti-Muslim “Knights Templar” network he claims to belong to. Prosecutors say they don’t believe it exists.When he smiled at one point during questioning Thursday, prosecutor Svein Holden asked him how he thought the bereaved watching the proceedings in court would react.

“They probably react in a natural way, with horror and disgust,” Breivik said.Breivik maintains his main goal is to avoid an insanity ruling because that would negate his cause. On Thursday, he repeatedly accused prosecutors of trying to “ridicule” him by highlighting portions of a rambling, 1,500-page manifesto he posted before the attacks.

In it — and in a shortened version he read to the court on Tuesday — he said the “Knights Templar” will lead a revolt against “multiculturalist” governments around Europe, with the aim of deporting Muslims.If found sane, Breivik could face a maximum 21-year prison sentence or an alternate custody arrangement that would keep him locked up as long as he is considered a menace to society. If declared insane, he would be committed to psychiatric care for as long as he is considered ill. – Yahoonews