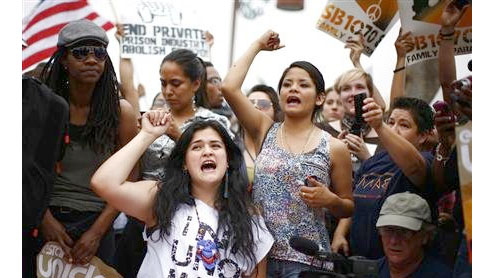 PHOENIX: A few hundred protesters, some toting placards reading “no to racial profiling,” marched through downtown Phoenix on Wednesday to urge the U.S. Supreme Court to block Arizona’s two-year-old crackdown on illegal immigrants.

“My message to the Supreme Court is ‘don’t single out the Hispanic race,'” said Melanie Renteria, 38, who was among 200-300 mostly Hispanic protesters rallying in a park ahead of the march.”I hope they overturn SB 1070. I think it’s wrong for local police to try to do what the government is supposed to do, which is immigration,” she added.Protesters, some chanting “no justice, no peace, no racist police,” set off on a three-mile route passing by city hall, a hardline local sheriff’s office and the headquarters of the federal immigration police in the city.

Police made nine arrests for obstructing the road and disorderly conduct, although most protesters “behaved themselves well … Those that got arrested wanted to be arrested,” Phoenix police department spokesman James Holmes said.Signed by Republican Governor Jan Brewer in April 2010, the state law sought to drive illegal immigrants out of Arizona and includes a measure requiring police to check the immigration status of anyone detained and suspected of being in the country illegally.Parts were blocked by a federal judge before it came into effect, and the Supreme Court began hearing arguments in the state’s appeal on Wednesday.

Among protesters gathering for the march was Vee Newton, 42, a Navajo tribal member who carried a placard reading “SB 1070 Targets Brown People.””One thing that is confusing to me is how does one distinguish who an immigrant is and who is not?” he said.”Brown-skinned people are usually the first people to be targeted … as immigrants in this state because Mexico is so close,” he added.Conservative justices, who hold a majority on the high court, appeared to endorse Arizona’s immigration crackdown on Wednesday, rejecting the Obama administration stance that the federal government has sole power over those who illegally enter the United States.

The court is likely to rule at the end of June as the political campaign season heats up.Carlos Garcia, of grassroots community organization Puente in Phoenix, said the law had already led to racial profiling in Arizona. If the law is upheld by the court he said he believed profiling would increase.”What SB 1070 will do is simply multiply that. It will make things worse in Arizona,” he said.

Brewer says the law is needed to safeguard Arizonans, and accuses the Obama administration of failing to secure the porous Mexico border. She said this week she had a “duty and obligation to defend the people of Arizona – especially when the federal government has fallen down on the job.”Earlier on Wednesday a smaller rally of around 25 conservative Tea Party activists gathered outside the state capitol in Phoenix, according to news reports. – Yahoonews

Novak Djokovic pulls out of Serbia Open after grandfather’s death