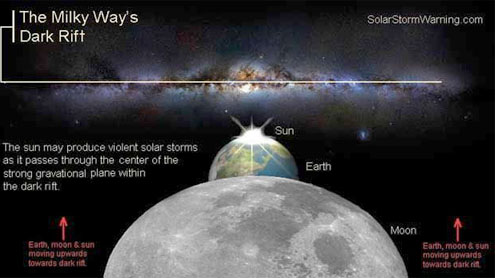 Astronomical experts have expressed their fears of a predicted solar storm’s negative impact on telecommunications, technology, electricity and aviation.  There are real fears of a super solar storm that may hit the Earth between 2012 and 2013.

The Astronomical Society in Jeddah confirmed a super solar storm will hit the Earth at the end of 2012 or the beginning of 2013. The greatest impact of this storm will be on the communications sector.”It is expected at the beginning of the new solar circle, which represents an increase in sunspots on the sun’s surface. The sunspots usually have tremendous activity resulting from the interactions of sunspots with each other. These interactions generate a solar explosion that releases a massive storm into space. The storm will be earth-bound and will hit the earth’s magnetic field. It generates either the phenomenon of ‘Aurora Borealis’ or the so-called ‘North damage.’

This phenomenon can penetrate the radio waves. However, it all depends on the force of the solar explosion,” Majed Abu Zahra, president of The Astronomical Society in Jeddah, told Arab News.”The consequences of this storm will affect the telecommunications, technical and electricity sectors. In March 1989, when the sun was at the top of its activity it launched streams of massive X-ray, and ultraviolet radiation reached the upper layer of the earth’s atmosphere with charged positive protons and negative electrons that led to heating of the upper layer and expanding it into the external space, affecting satellites moving in low orbits,” said Abu Zahra.

“The phenomenon of ‘Aurora Borealis’ can result in a temporary interruption of the wireless communication (radio waves). However, this phenomenon has no direct effect on the human life as the Earth is surrounded by the atmosphere and magnetic fields, but the real danger is to astronauts outside the Earth’s atmosphere if they do not take the necessary safety precautions,” added Abu Zahra.The society’s website is updating its warning that there may be super solar storms hitting the earth and may disrupt electronic devices.

“The food trucks will no longer be able to supply stores with food. The cell phones and computers also will no longer work. Without power from the grid most factories will no longer work. Within three days or so, food that’s in your local store will be gone. Since most cars and trucks today require electronic ignition to work, most vehicles will likely not work. However non-electric trains most likely would continue to work,” according to the website.

“There are suggested mechanisms by which solar variations may have an effect on climate. The first is solar irradiance changes directly affecting the climate. This is generally considered to be a minor effect, as the amplitudes of the variations in solar irradiance are much too small to have a significant effect. Secondly, there are variations in the ultraviolet component. The UV component varies by more than the total, so if UV were for some (as yet unknown) reason having a disproportionate effect, this might explain a larger solar signal in climate,” Dr. Zaki Al-Mustafa, president of the Astronomy department in King Abdul Aziz City for Science and Technology (KACST) told Arab News.

The aviation sector will be the biggest loser due to the solar storm’s negative impact on the communications sector. However, there are many commercial sectors that will also be affected. Estimated losses may reach more than $1 billion, according to economic experts.”The governments usually play a big role to compensate the losses resulting from climate changes as insurance companies cannot compensate these losses. However, no one can estimate the value of losses,” Yaseen Al- Jeffri, economic analyst, told Arab News. – Arabnews