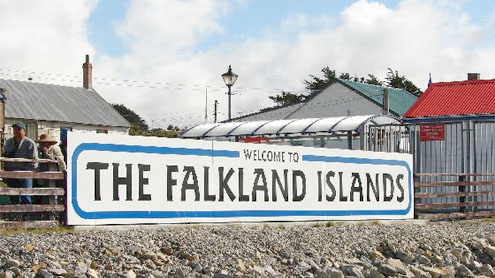 All UK exports to Argentina’s armed forces are being halted amid continuing tension over the Falkland Islands.

The UK government said the move should “ensure no British licensable exports or trade have the potential to be used by Argentina to impose an economic blockade” on the islands.Since 1998, the UK has sold products only that would maintain, rather than enhance, Argentina’s military.The trade has been worth more than £3m over the past five years.Argentina claims the Falklands as its own, but the UK has controlled the islands since 1833.

The two countries went to war in 1982 over the British overseas territory, and both nations marked the 30th anniversary of the start of the conflict earlier this month.In a written statement to the House of Commons, Business Secretary Vince Cable said the export control policy to Argentina was being tightened up with immediate effect.”The government has reviewed this policy in the light of recent actions by the Argentine government aimed at harming the economic interests of the Falkland islanders,” he said.

“We are determined to ensure no British licensable exports or trade have the potential to be used by Argentina to impose an economic blockade on the Falkland islanders or inhibit their legitimate rights to develop their own economy.”Trade with the Argentine military has been worth an estimated £3.3m over the past five years across 67 licences.The Department for Business, Innovation and Skills said an estimated 25 companies had exported to the Argentine military in this time.There are an estimated 37 outstanding licences, worth about £1m.

Typical exports have been spare parts for plane and boat engines and other materials to maintain existing military capability.The new policy will effectively shut down this trade, with existing and outstanding export licences to be reviewed and cancelled if not in line with the move.Mr Cable added: “In future no licences shall be granted for any military or dual use goods and technology being supplied to military armed users in Argentina, except in exceptional circumstances.”

Argentina has asked for negotiations about sovereignty of the Falklands – which it calls the Malvinas – but the British government says it will not discuss the issue without the agreement of the islanders.London has accused Buenos Aires of trying to impose an economic blockade on the islanders, after Argentina and other countries in the South American Mercosur trading block banned Falklands-flagged ships from docking in their ports.

More recently Argentina has complained to the United Nations about what it calls British “militarisation”, after the UK deployed one of its newest Royal Navy destroyers – HMS Dauntless – to the south Atlantic. – BBC