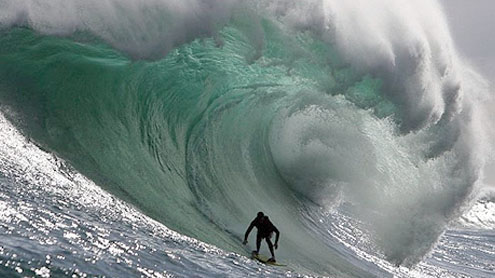 Jet skis, helmets and paddles are not pieces of equipment normally associated with surfing.But for riding giant waves they are almost standard issue.

Surf spots with waves the size of houses rise and fall off the coast of Ireland with some enthusiasts travelling up to eight miles offshore in search of these 50ft monsters.Once a well kept secret, known only to a select band of local pioneers, the waves around Ireland are now being thrust into the spotlight of the surfing world.

Ireland’s Ollie O’Flaherty and Englishman Andrew Cotton are being recognised for taming the wild waves of Mullaghmore Head in County Sligo. California will host an event paying tribute to these giant waves and the slightly crazy surfers that try to ride them. The Billabong XXL Big Wave Awards take place on 20 May. Amongst the six categories is ‘biggest wave’ where Ollie and Andrew are short listed for their exploits at Mullaghmore.It is not all about taming these giant walls of water. The Big Wave Award’s ‘wipeout of the year’ category recognises times when the enormous waves get the better of the surfers attempting to ride them.

Ollie O’Flaherty recalled an occasion recently when his friend and towing partner, Peter Connolly, had to pull him out of the water after a very tricky.”I’ve definitely had one or two pretty big scares…last October I got wiped out and was stuck at the bottom of one wave and I got picked up, hit and dragged over the reef three times,” said Ollie.In a sport where broken bones, and even death, can be the heavy price to pay for not catching a wave properly, he insists “the thrill outweighs the consequence for me.”His family has a strong surfing tradition. His uncle has been surfing for 25 years and first taught him how to surf when he was just four years old – a tradition he hopes to carry on.

Ollie has travelled around the world to more recognised surf spots in Indonesia and South Africa from his early teens “looking for the perfect wave” but says the big waves off the Irish coast stand up well against anything he has found.”To be brutally honest the best waves I’ve ever seen or surfed have been in Ireland, by a long way. It might not be good all the time but when it is good, it’s better than anywhere else in the world,” said Ollie.Despite having world class waves, Ollie says they come at a price.”The elements here can be so extreme sometimes. There would be days when you come in almost hypothermic because you are so cold.”

He says that one of the toughest aspects of surfing big waves is the preparation involved and waiting for the right conditions to come along.”We look at sea flow maps and see where the shallow reefs with very deep water around it are, so the waves have to break there. We check the wind and certain swells. So much time and effort goes into it.”I’ve been quite lucky because I’ve arrived on the scene when a lot of people have done a lot of exploring already. Mickey and Fergal Smith would be the pioneers of ‘heavy wave’ surfing in Ireland, they found a lot of the big waves.”Surfing in Ireland is not a new pastime – the first national championships were held in 1967 before a team was sent to the inaugural European surfing championships held in Guernsey.

It suffered a lull in popularity in the early eighties, but the sports revival was sparked when Bundoran hosted Europe’s flagship surfing event in 1985. Three years later, Ireland’s first purpose-built surf club house was opened at the same venue while younger surfers began to collect medals in European competition in the early 1990s.’Big wave’, also known as ‘heavyweight’ surfing, is a more recent addition to the Irish surf scene inspired by four-time UK surf champion Gabe Davies and county Donegal man Richie Fitzgerald who first came across the ‘big wave’ scene in California.

But it is not just the waves at Mullaghmore that have been creating a stir on the surf scene. Portrush and the surrounding areas have been serving up some seriously big waves too. Coleraine man Al Mennie has spent a lot of time exploring and discovering and surfing huge swells near picturesque Giants Causeway.After surfing near the Giants Causeway with Al Mennie, Devon pro surfer, Lyndon Wake “How am I going to top surfing the biggest waves of my life at one of the most amazing locations in the world?” – BBC