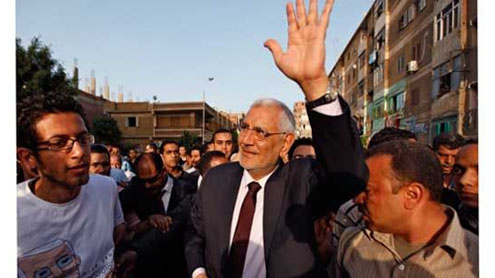 CAIRO: Egypt’s election committee announced on Thursday that Hosni Mubarak’s last prime minister could run for president after all, only two days after it had disqualifed him, stoking confusion before next month’s vote to replace the disgraced ex-president.

Ahmed Shafiq, a former air force chief, had been ruled out under a law passed by the Islamist-led parliament stripping political rights from top Mubarak-era figures.Shafiq appealed and the committee changed tack, drawing a rebuke from the Muslim Brotherhood which dominates parliament and championed the law.“After listening to Shafiq’s appeal, the committee decided to halt the decision to exclude him from the presidential race,” Farouk Soltan, the head of the election committee, told a news conference called to unveil the final list of 13 contenders.

Chronic confusion over who can run for president underlines the fragility of a democratic transition in the Arab world’s most populous country and raises questions over the military’s willingness to give up power after the formal handover in July.Adding further uncertainty, Soltan said the Supreme Constitutional Court would review the law that would have ejected Shafiq, and suggested that the presidential contest could be jeopardized if the court upheld the law.“The committee will continue its procedures until the election process ends unless the relevant state authorities decide to halt the election,” he said, when asked about public concerns about a possible vote delay.

Shafiq is a strong contender because of his links to the ruling generals and could appeal to some Egyptians who see a man with military experience as their best hope for an end to the political turmoil since Mubarak’s overthrow.His re-entry could split the anti-Islamist vote, making it a tougher race for Amr Moussa, a liberal who was head of the Arab League, as well as a former foreign minister under Mubarak. Ministers were not among those targeted under the new law.It will also anger Islamists and pro-democracy groups who fear Shafiq’s candidacy is a ploy by old regime figures who want to restore the tightly-controlled politics of the Mubarak era.

The Brotherhood and other groups have called for a demonstration on Friday called “Saving the Revolution,” which is expected to focus anger at the army and those like Shafiq viewed as trying revive the political fortunes of Mubarak’s allies.Mahmoud Ghozlan, a spokesman for the Muslim Brotherhood, said the election committee’s job was to apply the law and that its decision to restore Shafiq had damaged its credibility.“Its behavior is clearly characterised by confusion: today no, tomorrow, yes, and the truth is this shakes its status and its position as a neutral committee,” Ghozlan told Reuters. “It has a law and it is obliged to apply it and it is not its business to examine whether or not it is constitutional.”

Soltan defended the committee’s neutrality.“The committee confirms it is not against, or in confrontation with, anyone who has been excluded,” he said.The vote is set for May 23 and 24, with a run-off scheduled in June for the top two candidates. No one is expected to win more than 50 percent of the votes to win in the first round.Some opinion polls have put Moussa in the lead, although that was in late March. Several candidates have emerged since then and some have been disqualified, including Mubarak’s former spy chief, as well as the first-choice Brotherhood candidate.

Other front-runners include the Brotherhood’s Mohamed Mursi, who had been held in reserve, and Abdel Moneim Abol Fotouh, an ex-Brotherhood member who is trying to project a broader appeal.Shafiq said in February he would run for president because he had the experience to maintain good ties with the generals and ensure a smooth handover to civilian rule.The 71-year-old, who was civil aviation minister for a decade, said he can bridge the divisions in Egypt, which has been led by army officers since King Farouk’s overthrow in 1952.

A popular Salafi sheikh was also barred last week from the vote and remaining Islamist contenders, including the Brotherhood’s Mursi, are wooing his supporters.The voting intentions of Salafis, ultra-conservative Muslims whose main party came second behind the Brotherhood’s party in the parliamentary vote, appeared divided. Their votes could prove crucial in determining if an Islamist wins and who it is.A religious body whose decisions are respected by many Salafis and other Islamists endorsed Mursi on Wednesday.

“The Religious Authority for Rights and Reform announces its full support for Mohamed Mursi and appeals to all national and Islamic forces to announce their support for him as well to unite the word, strengthen the revolution’s march and to achieve the renaissance project,” it said.But the main Salafi Al-Nour party, which has said it may back a moderate Islamist candidate, accused the religious group of jumping the gun.

“I consider this announcement of its decision in this timing and in this way is a departure from the consensus initiative adopted by the Salafi call and is going ahead of the efforts to agree on one Islamist candidate,” said Mohamed Nour spokesman of Al-Nour in a statement.Another leading Salafi group has yet to pronounce, but has been meeting leading candidates in recent days. – Arabnews