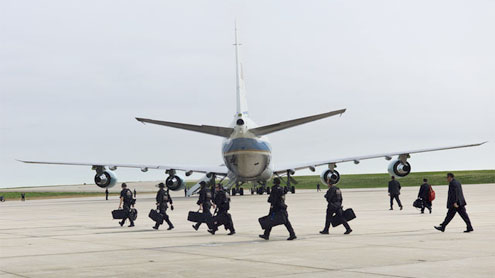 The US Secret Service says it is investigating allegations that some of its agents paid for strippers and prostitutes in El Salvador.

An advance presidential security team is reported to have paid for sexual favours in a strip club in 2011.Democratic Congressman Elijah Cummings said the Secret Service director had not yet found anything “credible”.The allegations come in the wake of a sex scandal involving Secret Service and military personnel in Colombia.Eight US agents have left the service over the Colombia allegations, in which Americans were found with as many as 20 women, thought to be prostitutes, at a Cartagena hotel.

The agents were part of a team preparing for a visit by Mr Obama to the Summit of the Americas earlier this month.Another 12 military personnel are also under investigation and have had their security clearance revoked.Mr Cummings, the top Democrat on the House Oversight and Government Reform Committee, spoke to Secret Service Director Mark Sullivan by phone on Thursday as the latest allegations emerged, he told reporters.”[The director] had not found anything credible, but he’s still looking into it,” Mr Cummings said.Secret Service spokesman Edwin Donovan used similar language, telling the Associated Press: “Any information brought to our attention that can be assessed as credible will be followed up on in an appropriate manner.”

US state department spokeswoman Victoria Nuland also confirmed that her agency is looking into the El Salvador story, reported by Seattle-based TV station KIRO-TV.The report included allegations that US embassy officials also visited the strip club.”Obviously, we will inquire of our embassy in San Salvador with regard to the conduct of our own employees,” Ms Nuland said. “But the article alleges that they attended the establishment, not that they engaged in any illegal or unsanctioned conduct.”

Senator Joseph Lieberman said on Thursday that he was disappointed to hear new allegations, and plans to hold hearings into whether the reports indicate a pattern of behaviour.”I keep running into people who say they have talked to agents who tell them of misconduct of this kind over the years,” Mr Lieberman said.In testimony to a Senate panel on Wednesday, Homeland Security Secretary Janet Napolitano said President Barack Obama’s safety had not been at risk, but that the misconduct was “inexcusable”.On Thursday, US Congresswoman Sheila Jackson Lee told CNN that the Secret Service was planning rule changes in response to the Colombia scandal. – BBC