Mexico regulators to vote on $1 billion fine vs tycoon Slim 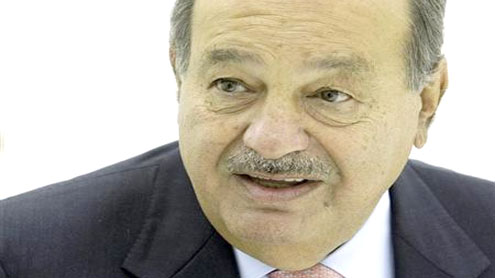 MEXICO CITY: Regulators are due to vote on Monday on one of Mexico’s biggest antitrust cases, a $1 billion fine for tycoon Carlos Slim, which has been bogged down in court appeals and disputes for a year.

Federal competition commission Cofeco slapped Telcel, the cash cow of Slim’s giant telecoms company America Movil, with the record sanction in April 2011 after ruling the company charged excessive prices to wireless and wireline competitors to connect to its network.Telcel appealed the fine and even managed to ban Cofeco’s President Eduardo Perez Motta from taking part in a second vote, where the agency will decide if it ratifies, drops or modifies the fine against Slim, the world’s richest man.Perez Motta got into trouble last year with comments he made about the agency’s crackdown on Telcel.

The Slim company complained of unfair treatment by Cofeco’s chief regulator, filing a motion that cut Perez Motta out of that second vote, which was originally expected in September.Getting Slim to pay such a large sum would be a major victory for Cofeco, whose ability to enforce the rules in a country where many major industries are concentrated in the hands of a few powerful families is seen as weak.

Cofeco “must ratify last year’s fine to Telcel due to multiple violations to the competition law by engaging in monopolistic practices on interconnection,” IDET, a telecommunications think-tank based in Mexico City, said in a written statement to Reuters on Sunday.A loss, or a significantly reduced fine for Telcel, would strengthen the view that regulators in Mexico lack enough muscle to reign in the massive influence of businessmen like Slim.

“Any possible changes should be based on facts unknown at the time of imposing the fine and Cofeco is required to explain the reasoning,” IDET added.In a bizarre twist on Sunday, Cofeco’s website was hacked. Instead of the agency’s home page opening, the image of scowling green pirate skull with a cutlass in its teeth appeared on a black screen beneath the words “Hacked by Nob0dy.”America Movil controls some 70 percent of the mobile market in Mexico, where it had 66.7 million subscribers as of March, and is the leading provider of mobile services in Latin America.

Cofeco has been mired in disagreements over the fine and the decision to sanction Telcel split its five-member board in 2011.Two commissioners voted against it. Another one, Agustin Navarro, disqualified himself from voting due to a conflict of interest, leaving just one commissioner backing the fine.Perez Motta used his casting vote, which counts for two, to push the decision toward a sanction.Navarro has since left Cofeco. Cristina Massa, a regulatory and economic adviser to President Felipe Calderon, replaced him.The vote meeting is set to start Monday at 5 p.m. local (2200 GMT). Perez Motta will start the session by naming the commissioner that will have the casting vote, and then leave. – Yahoonews