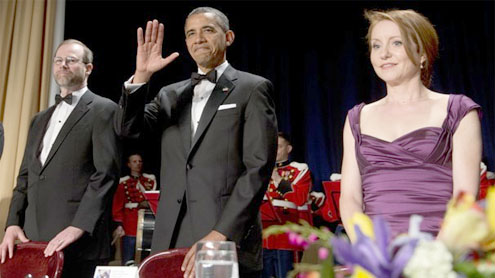 Generally speaking, there are two kinds of people in this world: those who get invited to the White House Correspondents’ Association dinner–the annual gathering of celebrities, politicians and media in Washington–and those who do not.

Those who get invited to so-called “nerd prom” get drunk, get starstruck, and get on Twitter to post photos of George Clooney–without noticing New Jersey Gov. Chris Christie in the same frame.The people who do not get drunk, get mad and get on Twitter to rip the people who do. Happens every year.But the outsiders–perhaps mirroring the tone set by the traditional roasts delivered by President Obama and host Jimmy Kimmel at Saturday’s 98th annual dinner–seemed a tad more vicious this time.

“It is the single most revolting annual gathering of pseudojournalistic ****suckery in all the land,” Gawker’s Hamilton Nolan wrote. “The White House Correspondents’ Association Dinner is a shameful display of whoredom that makes the ‘average American’ vomit in disgust.” Nolan was not invited.”I ask one question every year,” CBS News’ Mark Knoller (who was invited) wrote. “Who are all these people? Didn’t see any of them covering [the president] at Ft. Stewart yesterday.”

“The White House Correspondents’ Dinner underlines everything that’s systemically wrong with American journalism,” Milo Yiannopoulos, editor of Kernal magazine, wrote. “The purpose of a free press is to hold the powerful to account. You can’t do that if you’re sucking up, hoping for swanky dinner invitations.””This has become such a happening, such an event, the nerds can’t get in anymore,” the Washington Post’s “Reliable Source” columnist Amy Argetsinger observed.It wasn’t always that way: the White House Correspondents’ Dinner used to be a chance for the “nerdy” reporters to dine with their political sources. It’s now become D.C.’s schmooze-y answer to the Oscars, and inspires nearly as much hate.

“Is the fawning, sycophantic worship service to wealth, power and celebrity over?” Politico’s Ben White pondered early Sunday. “Or is there more crap today?””Celebrities and red carpets have ruined #NerdProm,” the Stuff Journalists Like Twitter feed noted. “The real nerds are at home, tweeting about the #WHCD.””With Lindsay Lohan and Kim Kardashian attending the White House Correspondents’ Dinner,” @JournalistsLike added, “I’m pretty sure we can stop calling it the #NerdProm.” Lohan and Kardashian were invited by Fox News.”The WHCD is indistinguishable in tone from the Oscars,” Yiannopoulos wrote. “That should terrify the American people.”

It scared Sallie Cunningham of Madison, Wisc., who tweeted: “WHCD confirmed my loss of faith in the media. Trust in media and politicians @ all-time low & plummeting.””You know it’s been a good party when George Clooney bearhugs you farewell at 3 a.m.,” CNN’s Piers Morgan wrote on Twitter. “Thanks @goldiehawn–you were a fabulous date!”

“Loved meeting @Diane_Keaton at #WHCA dinner last night,” Wolf Blitzer–who brought actress Mila Kunis as his “nerd prom” date last year–tweeted. “After the dinner I met for the first time NBC’s Ann Curry and Al Roker,” Fox News’ Greta Van Susteren, who invited Lindsay Lohan to the event, wrote in between tweets about Kardashian and Lohan. “Both were extremely nice–just as they are on TV. I had been told that Ann Curry was nearby and went looking for her. I wanted to talk to her because she had been to the Nuba Mountains in Sudan about a month before I was there.”

“Reese Witherspoon at my table, quite pregnant,” Howard Kurtz, host of CNN’s “Reliable Sources,” reported. (Earlier, Kurtz boasted about a gift bag from one of the WHCD pre-parties: “Swag bag from People party already legendary: hundreds of dollars of lotions, candies, books and assorted goodies.”) – Yahoonews