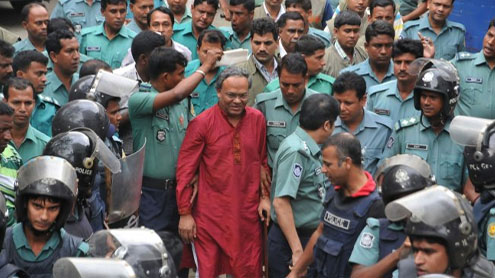 DHAKA: Bangladesh police said Tuesday they had arrested a top politician and raided the houses of several others as the government launched a crackdown on the opposition amid a deepening political crisis.

Ruhul Kabir Rizvi, deputy secretary general of the opposition Bangladesh Nationalist Party (BNP), was arrested Monday night over charges of blasts at a key government compound, Dhaka police spokesman Masud Ahmed said. “He was wanted in a case of blasts in the Secretariat. We have also raided the houses of several other BNP leaders who are wanted over charges of blasts and violence during Sunday’s opposition strike,” he told AFP.

Ahmed said at least 100 opposition officials have been charged and 27 others were arrested since Sunday including Sirajul Haq, an ex-junior health minister, and Kamruzzaman Ratan, an-ex BNP student wing leader. Nine small bombs rocked the capital Dhaka on Sunday, including two explosions inside the Secretariat, home to most government ministries and the cabinet office where the prime minister holds weekly meetings. No one was injured and damage was minimal.

The BNP has been organising protests across Bangladesh since one of its regional leaders, Ilias Ali, went missing on April 17 in a case it believes was an abduction by the security forces.Police found Ali’s car abandoned in an upmarket district of Dhaka. His driver is also missing. Protests over the disappearance paralysed the country for five days in the past 10 days and have left four people dead. Ali is the highest profile opposition politician to have “disappeared” since Prime Minister Sheikh Hasina took power in January 2009. – Dailytimes