Five arrested in US plot to blow up bridge 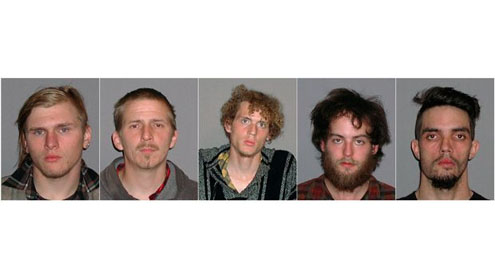 Five US plot to blow up bridge

WASHINGTON: US authorities arrested five self-described anarchists in the Cleveland area for allegedly plotting to blow up a four-lane highway bridge over a national park, but had no ties to foreign terrorism, the US Justice Department said on Tuesday.

The group, ranging in ages from 20 to 37, were arrested overnight by the FBI after planting the explosives on the bridge. Three have been charged already with conspiracy and attempting to use explosive materials and the other two are expected to be charged later on Tuesday.The FBI said the five arrested, identified as Douglas Wright, Brandon Baxter, Anthony Hayne, Connor Stevens and Joshua Stafford, were under continuous watch as part of an undercover operation and therefore the public was never in danger. The explosives, supplied by an undercover FBI agent, were inert.

“I want to stress … at no time during this investigation was the public in danger,” FBI agent Stephen Anthony told reporters in Cleveland. The bridge is about 15 miles south of Cleveland in an area popular with hikers and joggers.The group initially came under scrutiny by authorities in October 2011 when the FBI learned that some self-described anarchists planned to attend a protest in Cleveland, according to an FBI affidavit unsealed on Tuesday.An FBI informant saw four of the men going through the crowd expressing displeasure at demonstrators’ unwillingness to engage in violent acts. The men wore masks and carried walkie-talkies, according to the affidavit.

Over the next several months, the group considered a variety of targets for attacks including the Group of 8 leaders meeting in Chicago and the Republican National Convention in Tampa, according to the FBI affidavit.They also considered igniting smoke grenades off one bridge while they tried to knock large bank signs off the top of big office buildings in downtown Cleveland and even setting off a car bomb outside the Federal Reserve Bank there, the court papers said.Late last month, the group settled on trying to blow up the four-lane Brecksville-Northfield High Level Bridge that crosses the Cuyahoga Valley National Park by placing explosives on some of the columns in hopes of the entire bridge collapsing.

Wright told a confidential source working with the FBI that “as long as stuff ‘gets f–ked up’ he’ll be happy with the action,” the FBI said in its affidavit filed with the court.At one point, Wright expressed concern that the undercover FBI agent who sold them what they believed was powerful C-4 explosives for $900 was a police officer, but he continued with the plot.

The group had no ties to foreign terror organizations and the plot was not connected to the anniversary of the death of Al-Qaeda leader Osama Bin Laden, who was killed in a raid by US forces a year ago in Pakistan, said a US Justice Department official who declined to be further identified.The men were expected to appear in federal court in Cleveland on Tuesday.The undercover operation is the latest of a number of sting operations undertaken by the FBI and Justice Department in an effort to thwart attacks by domestic and foreign militants. – Arabnews