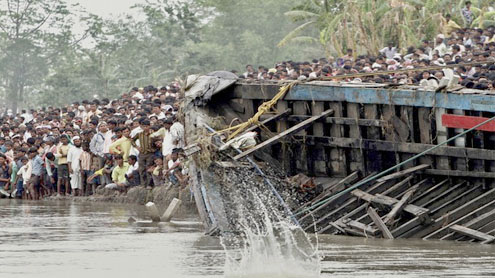 GUWAHATI, India: Rescue workers fought heavy wind and rain to search for survivors after at least 103 people drowned on an overloaded ferry carrying about 300 people that sank at night on one of India’s largest rivers on Monday, police said.

About 100 people were rescued, said Jayanta Narayan Choudhury, police chief of the state of Assam where the boat sank. The accident was the worst of its kind in recent memory in India’s northeastern region.People were sitting on the roof of the ferry carrying mainly local farmers and their families when it tipped over in a storm on a one-km (half-mile)-wide stretch of the Brahmaputra river in a remote region of the state, close to China and Bangladesh, police said.

“Our rescue efforts have been hampered by bad weather, it is still raining heavily and there is almost zero visibility in the area,” P.C. Saloi, a police officer at the scene, told Reuters. Rescue operations were called off late at night and were set to begin again at sun up.Eyewitnesses told police the vessel was old and broke in two after capsizing in the swollen river, one of Asia’s largest. Smaller boats often get into trouble on the river, but the ferry was the largest to sink in recent years.

The boat was overloaded with people and sacks of rice, among other goods, and carried no lifeboats or life jackets, the police officer said.Prime Minister Manmohan Singh, who represents Assam in the upper house of parliament, said he was “shocked and grieved” by the accident.Rescue workers said they had contacted colleagues downstream in Bangladesh to help in the search for survivors. – Arabnews

Five arrested in US plot to blow up bridge