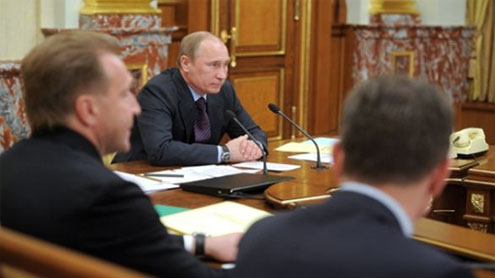 Prime Minister Vladimir Putin said his stint in the job sometimes felt like getting an education, as he bid farewell to his Cabinet on Wednesday at its final session.

Before approving higher taxes on the gas industry, Putin in a speech thanked the ministers for helping the country to withstand the battering of the global economic crisis. His inauguration for a third presidential term just days away, he conceded that his previous experience of running the country as president wasn’t always sufficient for the hard choices of the past four years.

“It was also a special test and a special schooling for me,” he said, speaking almost without looking down at the prepared statement. “I sometimes had the impression that I was taking some advanced training courses.”Putin spoke at a session of the full Cabinet, a rare phenomenon during his tenure. In one of his first moves as prime minister, he established a trimmed down lineup of the Cabinet that he named the Presidium.Some of the key ministers, however, chose to skip the potentially memorable moments of last seeing Putin at the head of the Cabinet meeting table. First Deputy Prime Minister Viktor Zubkov, Economic Development Minister Elvira Nabiullina and Finance Minister Anton Siluanov were away on vacation.

Former Regional Development Minister Viktor Basargin did come, despite his appointment as acting Perm governor a few days earlier.The symbolic value of the meeting didn’t mean the Cabinet had a lax agenda.It approved a tax maneuver that Putin touted during his campaign. The change envisages a higher tax burden on businesses that extract natural resources and those who lead a luxurious lifestyle, while providing the incentive of lower taxes in some other areas.As part of the package, the Cabinet approved steady increases of the tax on natural gas production that will affect both the cash cow Gazprom and smaller rivals not controlled by the state.

The government will also raise the rate of the vehicle tax to charge more from owners of Maybachs, Mazerattis and similar models that have more than 410 horsepower, Deputy Economic Development Minister Sergei Shatalov said.About 20,000 cars will come under the new rate, he estimated. Of them, 7,000 cruise the roads of Moscow and another 1,000 the Moscow region, he said.The increased tax will yield between 2 billion rubles ($69 million) and 3 billion rubles, representing modest additional revenue, he said. Owners of jumbo or pricey housing, or a collection of residences, will also eventually have to pay more. While the standard rate will be 0.05 percent of a property’s value, for owners of a property or set of properties that are cumulatively worth upward of 100 million rubles the rate will double, Shatalov said.

The rate will jump sixfold for properties that are worth more than 300 million rubles.He didn’t say exactly when the rule will begin to apply, but added that the government wouldn’t reap much more as a result of the measure.”It bears the nature of social justice rather than pursues fiscal goals,” he said.One area where the fiscal burden will be eased is the property tax on new equipment for businesses. The government will cancel the tax in a bid to spur technological upgrades.The measure will allow companies to save 50 billion rubles every year over 2013-2015, Shatalov said.The tax, whose rate is 2.2 percent, is paid to regional coffers.Excise taxes on tobacco and alcohol are also set to grow under the plan approved Wednesday. – Themoscowtimes