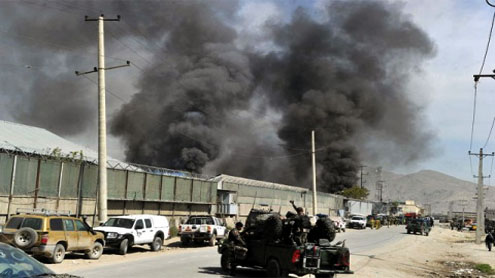 KABUL: Taliban bombers attacked a heavily fortified guesthouse used by Westerners in Kabul on Wednesday and announced the start of their annual ‘spring offensive’, defying calls from visiting US President Barack Obama about ending the war.

“Al-Farouq spring offensive will be launched on May 3 all over Afghanistan,” the militant group said.Seven people were killed after attackers disguised in burqas detonated a suicide car bomb and clashed with guards at the ‘Green Village’ complex used by the European Union, the United Nations and aid groups, officials said. The Taliban said the assault was a riposte to Obama.The Taliban dismissed the new strategic pact signed by Afghan President Hamid Karzai and his US counterpart Barack Obama as “illegitimate”.

In a statement posted on the Voice of Jihad website, the militants said Karzai was not authorised to sign the document.The Taliban “deems this document the selling-document of Afghanistan by a powerless puppet (Karzai) to his invading master and condemns it in worst possible terms”, the statement said.The Taliban “as the true representative of the Islamic nation of Afghanistan with all its strength will continue to its armed Jihad (holy war) against all the contents of this illegitimate document until the full withdrawal of all invading forces and their puppets from Afghanistan”, it added.

The Taliban said Karzai had no right to sign the deal and accused him of selling Afghan sovereignty to the Americans.The Green Village assault began around two hours after Obama left.Police said suicide attackers wearing burqas struck at 6:15 am (0145 GMT), detonating a car bomb before clashing with guards. The interior ministry said seven people were killed, including at least six Afghans.There were three attackers, the ministry said, one in the suicide car bomb and two who got inside the complex. One blew himself up while the other was shot dead by security forces.

Mangled bodies were seen lying on the road after the attack, which left two vehicles completely destroyed and blew out the windows of a nearby school.Health ministry spokesman Kargar Noorughli said 18 people were wounded and eight admitted to hospital.Taliban spokesman Zabiullah Mujahid told AFP the attack was a message to Obama to say the militants would continue to fight until all foreign forces had left.The militia said its spring offensive, code-named Al-Farooq, would from Thursday target “foreign invaders, their advisors, their contractors, all those who help them militarily and in intelligence”. – Nation