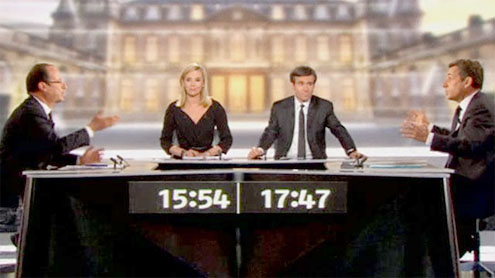 French President Nicolas Sarkozy and his challenger Francois Hollande have traded insults in their only TV debate of the election campaign.

The president called Mr Hollande a “little slanderer”, while his rival said Mr Sarkozy shirked responsibility.Mr Sarkozy defended his record and said he had kept France out of recession. But Mr Hollande said France was going through a “serious crisis” and was struggling with slow growth.The run-off vote takes place on Sunday.The BBC’s Gavin Hewitt says it was a long, bad-tempered debate that left the impression that neither candidate liked each other.There were plenty of angry exchanges, with both candidates accusing each other of lying.

Mr Hollande accused President Sarkozy of “ruining the French economy”, prompting his rival to say he had been unfairly blamed.”It’s never your fault,” Mr Hollande responded, to which Mr Sarkozy said: “It’s a lie, it’s a lie!”Analysts said neither candidate landed a knockout blow – which may be to the advantage of Mr Hollande, the favourite for Sunday’s vote.Opinion polls suggest the Socialist candidate has a lead of seven percentage points.Mr Hollande said he would work to help those in need, saying that those “with privileges” had been protected under Mr Sarkozy.”I will be a president for justice, because we are going through a serious crisis that hits in particular the most modest of us, the hardest working people, those who are the most vulnerable.”

He accused Mr Sarkozy of failing to take responsibility for the economic difficulties that France was suffering, blaming it instead on the global economic crisis.Mr Hollande said unemployment levels were “a record” and referred to the downgrading of France’s credit rating.Lashing back at Mr Hollande, President Sarkozy said France had done better than other European countries in coping with the economic climate.”What is the country to not have known recession since 2009 – it is France,” Mr Sarkozy said.He rejected Mr Hollande’s proposed stimulus programmes, insisting that France had to cut spending and debts.

The president also accused Mr Hollande of representing only the unions, rather than all of France.”It’s all very nice to talk about uniting people, but it has to be put into practice,” he said.Mr Hollande also said he would be firm on demands made by the Muslim community, saying he supported France’s ban on face-covering veils and would not allow separate hours in swimming pools for men and women.Mr Sarkozy has similarly criticised demands for special treatment from France’s Muslim community.The debate was broadcast live by several channels and ran over time to nearly three hours.

There has been a huge build-up to the event, billed variously by newspapers as The Last Duel and The Final Confrontation.About a third of France’s 63 million people were set to watch the live debate.Mr Sarkozy had attacked Mr Hollande for refusing to hold three election debates instead of one, but there has been just one debate per presidential election since 1974, apart from in 2002 when Jacques Chirac refused to debate with the far right’s Jean-Marie Le Pen.

A key moment in Mr Sarkozy’s 2007 debate with Segolene Royal – Mr Hollande’s former partner and mother of his children – came when he told the Socialist candidate to “calm down”. She repeatedly refused to do so, saying some anger was “perfectly healthy”.In this debate, Mr Sarkozy came across as the more aggressive participant, leaning forward and raising his voice more often, analysts say.It was presented by two French TV anchors, Laurence Ferrari of TF1 and David Pujadas of France 2. – BBC