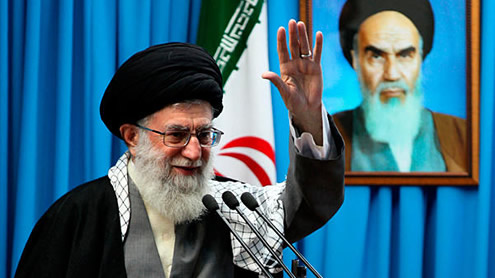 Khamenei’s expected majority is likely to mean a tougher final year for Ahmadinejad in his second and last term. With reformists mostly sidelined and opposition leaders under house arrest, the vote is a test of the popularity of Khamenei’s clerical establishment rather than an opportunity for fundamental change in the way the Islamic Republic is run. Sixty-five of Parliament’s 290 seats are being contested after Khamenei loyalists led the first round in March. More than 50 percent of seats have already been filled by new members, including a large number of independents, so the Iranian Majles is undergoing an extensive face-lift. The election will have no major impact on Tehran’s nuclear row with the West or its foreign affairs, which are already determined by Khamenei.

Its significance lies in gauging just how deep the rivalry between supreme leader and president has become and it could also throw light on possible contenders for next year’s presidential elections. Among the five candidates who have already secured seats in Tehran, Gholam-Ali Haddad Adel, a key ally of Khamenei and father-in-law to his son Mojtaba, won most votes. “We have to wait for the factions to be formed before we can see what happened. But whatever happens the next parliament will not give him (Ahmadinejad) an easy ride. I doubt he’ll be very happy,” said analyst Mohammad Marandi of Tehran University. The United Front of Principalists — an alliance of conservative group tied to the supreme leader — was the largest entity in the first round but analysts say Iran’s political system makes it tricky to forecast candidates’ allegiance. “This list contains many Ahmadinejad critics … but many of its candidates are newbies whose true political leaning is uncertain. As such, we don’t know how they will necessarily behave,” said Iran analyst Reza Esfandiari.

“Political groupings in Iran are not disciplined, and there is no ‘whip’ in the Iranian parliamentary system that coerces MPs to act one way or the other,” he added. The waters are muddied by the fact that many successful candidates appeared on the lists of both the pro-Khamenei Principlist Front and the equally hard-line, pro-Ahmadinejad Resistance Front, making it difficult to fathom who can count more on the lawmaker in question. The political persuasion of more than 70 independent candidates elected in the first is also unknown. “Many of them are from small provinces and are not known politically. But some have been supported by Ahmadinejad during the campaign and so they will very likely tend to support him,” said Sadeq Zibakalam, an Iranian professor of political science. Khamenei swiftly endorsed Ahmadinejad’s re-election in 2009, rejecting opposition allegations of widespread fraud that led to eight months of unrest.

But a rift opened between the two leaders when Ahmadinejad made several key policy decisions that his critics said were not in line with the supreme leader and undermined the leading political role of clergy. Even before the current election, Ahmadinejad was already regularly criticized by parliament and, in March, he became the first president in the Islamic Republic’s history to be summoned to the assembly for questioning. Parliament, which has the power to impeach the president, accused him of economic mismanagement and making illegal appointments. In the past months, dozens of Ahmadinejad allies have been detained or dismissed from their posts for being linked to a “deviant current” that his rivals say aims to sideline clerics. Ahmadinejad has inflicted hardship on Iranians, critics say, through soaring inflation caused in part by slashing food and fuel subsidies. Iran is also under ever-tightening economic sanctions driven by western countries that believe Tehran may be developing nuclear weapons technology, something it denies. It also faces the threat of Israeli military strikes on its nuclear sites.

Tehran resumed nuclear talks with major powers in mid-April after more than a year. A second round of talks is scheduled for May 23 in Baghdad. Khamenei called for a high turnout in yesterday’s second round. “My suggestion is that they (people) should take the second round as seriously as the first round. The higher the number of votes for lawmakers … the better they can work,” state television quoted him as saying after he cast his vote. Polling stations in 33 constituencies, including the capital Tehran, opened to voters at 8 a.m. They were due to close at 6 p.m. but Iranian media reported that the voting time was extended by two hours and until 9 p.m. in the greater Tehran area. Provincial officials were authorized to allow further extensions if needed. Hours after the voting began, state television showed footage of some polling stations where queues of voters were waiting to cast their ballots.

“I will vote because my vote will be a defeat for Iran’s enemies,” television quoted a young man identified only by his first name of Alireza as saying. Turnout in the first round of parliamentary election was 64 percent. The interior ministry has said final results were expected within 24 hours after the polls close.

The new Parliament convenes on May 27. – Arabnews