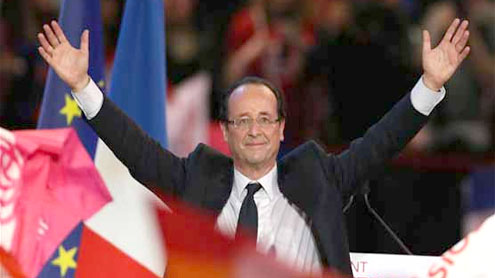 France voted in a presidential run-off election Sunday that could see Socialist challenger Francois Hollande defeat incumbent Nicolas Sarkozy by capitalizing on public anger over spending cuts and a Europe-wide push for austerity.

The election outcome will impact efforts to fight Europe s debt crisis, how long the nation s troops stay in Afghanistan and how France exercises its military and diplomatic muscle around the world.Hollande voted in his electoral fiefdom of Tulle in central France. Asked Sunday evening about unconfirmed reports he was leading and whether he saw that as encouraging, he told a small number of reporters, “Yes, but they re only estimations. They are just starting to unload the ballot boxes now.”

French election officials and polling agencies could not confirm the figures being reported by Belgian radio and Swiss television and radio station. Partial official results and polling agency projections are expected around 1800 GMT (2 p.m. EDT) Sunday, after all polling agencies nationwide are closed.Hollande campaign official Francois Kalfon was enthusiastic well before voting stations closed. He predicted a big victory party Sunday night on the Place de la Bastille, the iconic plaza associated with the French Revolution.

“There are reasonable reasons to think that there will be a new president after the election tonight,” Kalfon said. He said his confidence was based on polls conducted before voting day.Six European countries were holding elections for various levels of government Sunday.Aside from France, they include Greece, where the results of a parliamentary vote are seen as critical to the country s prospects for pulling out of a deep financial crisis felt in world markets. A state election in Germany and local elections in Italy were seen as tests of support for the national government s policies. Serbia and Armenia also were holding elections.

Earlier Sunday, the 57-year-old Hollande shook hands and chatted with voters on his way into the polling station.”It s going to be a long day,” Hollande told reporters gathered to watch him vote. “It s up to the French people to decide if it s going to be a good day.”Sarkozy, accompanied by wife Carla Bruni-Sarkozy, voted at midday in Paris  16th arrondissement. Scores of television cameras surrounded the couple, and members of the public could be heard chanting “Sarkozy! President!” But Sarkozy, 57, chose not to speak on live TV.

The outcome of the French presidential vote could weigh heavily on talks about the European debt crisis.Hollande has promised more government spending and higher taxes including a 75-percent income tax on the rich and wants to re-negotiate a European treaty on trimming budgets to avoid more debt crises of the kind facing Greece.That would complicate relations with Germany s Angela Merkel, who championed the treaty alongside Sarkozy.

Under Sarkozy, France pledged to rein in its spending while the rest of 17 countries that use the euro embark on a strict period of belt-tightening. In France, that has included programs designed to reduce government employment.Sarkozy, disliked by many voters for his handling of the economy and brash personality, promised he could produce a surprise victory on Sunday.Turnout was a surprisingly high 79 percent in the first round April 22, and polls suggested that Sarkozy s best chance of an upset would come from even greater voter turnout Sunday.

Interior Ministry figures suggested voters were turning out in greater numbers than in the April 22 first round. At 5 p.m. (1500 GMT; 11 a.m. EDT), turnout was nearly 71.96 percent, up from 70.59 percent at the same time two weeks ago.Polling stations opened in mainland France early Sunday, a day after voting got under way in France s overseas territories. French law bars the publication of results before all polling stations have closed to avoid swaying the outcome, and the fine for doing that is €75,000 ($98,145). Still, many expect Sunday s election results to be leaked early via Twitter or other online methods, as they were during the first round two weeks ago.

Asked Friday what he would do if he loses, Sarkozy said simply: “There will be a handover of power.””The nation follows its course. The nation is stronger than the destiny of the men who serve it,” he said.Hollande was benefiting from anti-Sarkozy fervor, with some voters saying their choice was more a vote against him than one for Hollande.Stephanie Debaye, 32, said she was voting for Sarkozy s departure.”On behalf of my compatriots, I felt quite insulted. He was so aggressive. I hope things will calm down,” Debaye said outside a polling station.

Another Paris voter highlighted this anti-Sarkozy vote, saying she s backing Hollande, even though his program is “suicidal.””He ll raise the minimum wage, increase civil servants. But France is already in debt,” said Florence Macrez. His fiscal reform project will only increase the pressure especially on the middle class, she added.Nearby the Socialist Party headquarters in central Paris, Sunday morning churchgoers said the next president must focus first on fixing France s sputtering economy.It “was not properly handled by the previous president,” said Dominique Grange, a retiree.

Hollande beat Sarkozy by about 500,000 votes in the first round of voting on April 22, in which 10 candidates competed for the job of running the nuclear-armed country with a permanent seat on the U.N. Security Council for the next five years.Hollande has received the support of a prominent centrist who won 9 percent of the vote in the first round of presidential elections, Francois Bayrou. Bayrou said Thursday night he would not give his voters specific guidance for Sunday s vote but that he will cast a ballot for Hollande.Sarkozy s critics have often faulted him for his brash style, alleged chumminess with the rich, and inability to reverse France s tough economic fortunes and nearly double-digit jobless rate.