Francois Hollande to set France on new course after win 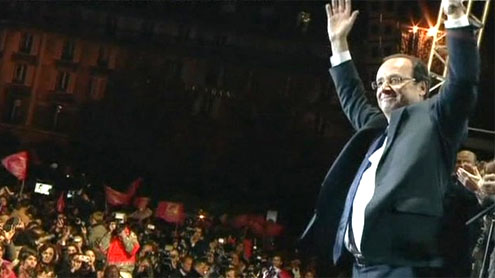 French President-elect Francois Hollande is to start work on forming a new government, after telling supporters his victory gave hope of an end to austerity.

Hollande has vowed to rework a deal on government debt in eurozone member-countries to focus on promoting growth.The Socialist leader won just under 52% of votes in Sunday’s run-off election.Centre-right incumbent Nicolas Sarkozy is the first French president since 1981 not to win a second term.He will hand power to Mr Hollande on 15 May, following talks between the two camps, the presidency has said.

Mr Hollande must act quickly to reassure other eurozone countries he is up to the considerable challenge he faces, the BBC’s Christian Fraser reports from Paris. The Socialist has called for a renegotiation of a hard-won European treaty on budget discipline championed by German Chancellor Angela Merkel and Mr Sarkozy.Mrs Merkel congratulated the president-elect by phone and invited him to Berlin to hold talks soon, but she warned the fiscal compact was “not up for grabs”.

“The core of the discussion is really all about… whether we are going to have again programmes for growth which are on the back of debt or indeed whether we are going to have programmes for growth that are sustainable and indeed rely on the competitiveness of the countries,” she told a news conference in Berlin.UK Prime Minister David Cameron also called Mr Hollande to congratulate him.Mr Hollande feeds a renewed sense of hope in the country – particularly among the young – that amid the austerity, there can be jobs and salaries, our correspondent adds. Mr Hollande offers a fresh start – but the debt problems for France are still the same.Jubilant Hollande supporters gathered at the Place de la Bastille in Paris – a traditional rallying point of the Left – to celebrate.

Mr Hollande – the first Socialist to win the French presidency since Francois Mitterrand in the 1980s – earlier gave his victory speech in his stronghold of Tulle in central France.He said he would push ahead with his pledge to refocus EU fiscal efforts from austerity to “growth”.”Europe is watching us, austerity can no longer be the only option,” he said.After his speech in Tulle, Mr Hollande headed to Brive airport to fly to Paris to address supporters at the Place de la Bastille.

“I am the president of the youth of France,” he told the assembled crowd of tens of thousands of supporters.”You are a movement that is rising up throughout Europe,” he said.Mr Hollande capitalised on France’s economic woes and President Sarkozy’s unpopularity.The Socialist candidate has promised to raise taxes on big corporations and people earning more than 1m euros a year.He wants to raise the minimum wage, hire 60,000 more teachers and lower the retirement age from 62 to 60 for some workers.In his concession speech, Mr Sarkozy told supporters: “Francois Hollande is the president of France and he must be respected.”

The outgoing president said he was “taking responsibility for defeat”.Hinting about his future, he said: “My place will no longer be the same. My involvement in the life of my country will now be different.”During the campaign, he had said he would leave politics if he lost the election.Admitting defeat soon after polls closed on Sunday evening, centre-right incumbent Nicolas Sarkozy wished “good luck” to Mr Hollande.Mr Sarkozy, who has been in office since 2007, had promised to reduce France’s large budget deficit through spending cuts.He becomes the latest European leader to be voted out of office amid widespread voter anger at austerity measures triggered by the eurozone debt crisis.Mr Hollande is expected to be inaugurated later this month. A parliamentary election is due in June. – BBC