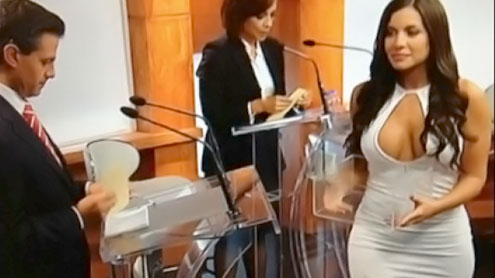 The buzziest moment during the first debate among Mexico’s four candidates for president this Sunday happened before anyone had said a word.

At the debate’s start, a curvy model wearing a form-fitting white dress with a revealing cutout showing off her generous cleavage, presented a box for candidates to draw papers that would determine who would go first.The sultry mystery woman’s momentary appearance stole the show. Julia Orayen, a model and former Playboy Playmate was acting as a Mexican Vanna White for the event. The stunning—and distracting–brunette appeared for all of 30 seconds, but it was long enough to set the twitterverse on fire, turning grown men into 13-year-old boys.”The best was the girl in white with the cleavage at the beginning,” came the comment from former Mexican Foreign Minister Jorge Castaneda, a New York University professor.

As Yahoo! Mexico’s writer Miguel Ángel Castillo put it, “Decide for yourselves, but which presidential candidate can compete with that?” As for how Orayen and her revealing dress ended up on stage? Fingers are already being pointed. Alfredo Figueroa, director of the Federal Electoral Institute, which was responsible for organizing the debate, blamed a production company assigned to help set up the debate as the culprit—and claimed he had requested a “sober” dress. (Perhaps he used air quotes?). The institute issued an apology for the woman’s racy getup.

The sole woman candidate who participated in the debate forum, Josefina Vazquez Mota said she thought Orayen “very attractive” but that the dress was inappropriate, adding, “I was surprised, and I [thought], ‘Well, what sort of event are we attending here?'” – Yahoonews