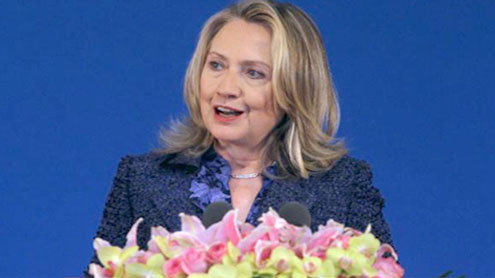 NEW DELHI: US Secretary of State Hillary Clinton on Monday urged India to further cut its imports of Iranian oil, saying that the Islamic republic posed a major threat if it developed nuclear weapons.

Clinton commended India for lowering its purchases but called for more as a deadline looms for the United States to slap sanctions on nations that still buy Tehran’s oil.”We hope they will do even more and we think there is an adequate supply (from other exporters) in the market place,” Clinton told a forum in Kolkata before she met Prime Minister Manmohan Singh in New Delhi.”We think this is part of India’s role in the international community.”

India, which depended on Iran for 12 percent of its imports last year, says it has cut Iranian imports “substantially” despite initially insisting it would not join US and European-led efforts to choke off Tehran’s oil revenues.Faced with critical questions from students, Clinton stressed that the United States had no quarrel with the Iranian people and voiced hope for a peaceful solution, with new talks coming up between Iran and major powers.But Clinton called the prospect of a nuclear-armed Iran “the principal threat” and said that US ally Israel — which is generally thought to have its own undeclared nuclear arsenal — had legitimate worries.

“This is a regime that has a history of aggressive behaviour and I don’t think you deal with aggressors by giving in to them,” Clinton said.”I think that Israel is very worried that if Iran were to get a nuclear weapon, there might be a decision by some future leader and that would be devastating,” Clinton said before she flew to New Delhi.Iran says that its uranium work is for peaceful purposes and US intelligence has not concluded that Tehran is developing a nuclear bomb, with many experts believing the regime is most concerned with its own survival. – Thenews