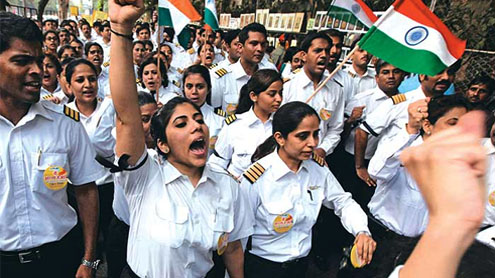 Air India canceled four international flights Tuesday after about 150 pilots failed to turn up for work in a protest against unpaid salaries and work conditions.

The airline has sacked 10 pilots and has ordered the striking pilots to return to work by Tuesday evening, said K. Swaminathan, an Air India official.Passengers who boarded an Air India flight to Chicago from Mumbai, found themselves stranded in New Delhi after the flight was disrupted by the strike at its stopover in the Indian capital.The airline was accommodating passengers on other flights, it said.Air India, which operates some 50 international flights every day, has canceled flights from New Delhi to Chicago and Toronto, and from Mumbai to Hong Kong and New York’s Newark airport.

The strike could cripple the beleaguered airline’s international operations just ahead of the peak holiday season here.The government recently pledged a $6 billion bailout for the ailing national carrier with the money to be pumped into the company over the next eight years.Air India has been losing about a billion dollars a year as it struggles with the legacy of a poorly executed 2007 merger, debt costs and a swollen staff.The pilots were negotiating for better pay and job promotions when the talks broke down and around 150 pilots called in sick.

Jitendra Awhad, president of the Indian Pilots Guild, the trade union of Air India pilots, said some pilots had not been paid for six months.“We resorted to this strike action only after the management failed to concede to our demands,” Awhad said.Another of the pilots’ demands stems from unresolved issues from the 2007 merger of Air India and the state-run domestic carrier Indian Airlines.Air India’s management has decided that pilots from both carriers would undergo training on the new Boeing Dreamliner aircraft.

Air India pilots have objected to this saying it would hinder their career prospects. The first of four long-haul Dreamliner aircraft are expected to be delivered to Air India by June.Awhad said another 100 pilots would stay away from work Tuesday unless management conceded to their demands.Aviation Minister Ajit Singh said the airline’s management had the backing of the government.“We support the Air India management. Passengers are being inconvenienced. Pilots should act more responsibly,” Singh said. – Khaleeejnews