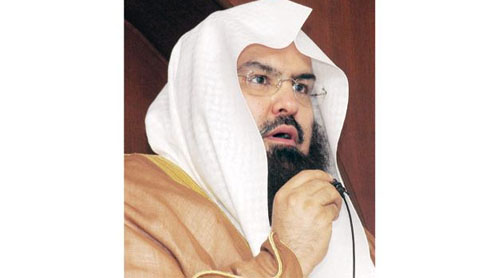 Sheikh Abdul Rahman Al-Sudais, imam and khateeb of the Grand Mosque in Makkah, has been appointed head of the Presidency for the Two Holy Mosques with the rank of a minister, a Royal Court announcement said yesterday.

Al-Sudais, a learned Islamic scholar, replaces Sheikh Saleh Al-Hosain, who had requested higher authorities to relieve him from the position. Sheikh Al-Sudais is known for his melodious Qur’an recitation that has inspired Muslim faithful across the world.“We have accepted the request of Sheikh Saleh Al-Hosain to be relieved of his position as head of the Presidency of the Two Holy Mosques because of health reasons and appointed Sheikh Abdul Rahman Al-Sudais in his place,” Custodian of the Two Holy Mosques King Abdullah said in a royal decree.

In 1404H, Sheikh Al-Sudais was appointed imam and khateeb of the Grand Mosque. In 1408H he received his master’s degree from Imam Muhammad bin Saud Islamic University in Riyadh. He worked as a lecturer at the College of Shariah in Umm Al-Qura University, which awarded him a doctorate degree in 1416H.Sheikh Al-Sudais used to deliver lectures on various Islamic topics such as Islamic faith, jurisprudence, Qur’an commentary and Hadith at the Grand Mosque. He also gave Islamic rulings on various issues presented by pilgrims during the Haj season.

He has delivered several lectures inside and outside the Kingdom. During the past two years he visited India, Pakistan, Malaysia and Britain. He has published several research papers on various topics including a message to Muslim women.Last year, Al-Sudais visited the Higher Institute for Advanced Islamic Studies in Malaysia where he gave a lecture on Islamic civilization in the backdrop of modern challenges. He said Islam was facing challenges from within and outside the Muslim community. – Arabnews