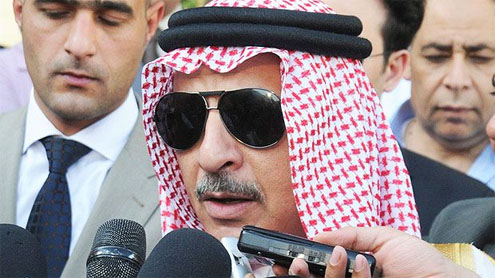 Saudi Arabia yesterday agreed to give an initial loan package worth nearly $ 2 billion to support Egypt’s economy. It has transferred $ 1 billion to Egypt’s central bank as an eight-year deposit, Faiza Abu El-Naga, the Egyptian minister for planning and international cooperation, said yesterday.

“Saudi Arabia is implementing its financial package for Egypt, which will go a long way in helping the battered economy,” said El-Naga while thanking the Kingdom for its support.”Saudi Arabia has pumped this fund in the form of a deposit at the Central Bank of Egypt, while it also provided a $ 500 million loan to boost Egypt’s economy,” said the minister in a statement released by the Egyptian Embassy in Riyadh.

Saudi Ambassador to Cairo, Ahmed Qattan, confirmed the report saying the Kingdom signed an agreement with Egypt to provide $500 million to support its various economic sectors and $1 billion to deposit in the Egyptian Central Bank.”The Kingdom also gave $250 million to finance gas exports from the Kingdom and $200 million to finance Egypt’s small and medium enterprises,” the Saudi Press Agency quoted Qattan as saying. He said Custodian of the Two Holy Mosques King Abdullah approved the aid to support Egypt and its economic stability.

After the political unrest, Egypt’s economy has been experiencing difficult times, which prompted Cairo to urge more support from friendly countries as well as the International Monetary Fund. In fact, Egypt’s foreign exchange reserves fell from $ 36 billion in December 2010 to only $ 16.3 billion in January 2012.In February 2012, Standard & Poor’s rating agency lowered Egypt’s credit rating from B+ to B in the long term, which indicates turbulent times for the Egyptian economy if normalcy is not restored early and the financial institutions, including banks, do not start working more aggressively.

Asked about the aid and assistance provided by other countries, Nabeel Baker, a spokesman of the Egyptian Embassy in Riyadh, said: “The Kingdom has extended a helping hand to Egypt in times of need and in all emergency situations.” Riyadh is set to send Egypt billions of dollars in aid, including the $1 billion that has already been disbursed. “The Saudi aid package demonstrates the good relations between the two countries,” he added.

The Kingdom and Egypt are highly influential countries in the Arab world. Egypt, which is also negotiating a $3.2 billion loan from the International Monetary Fund, has been seeking funds from international donors to help it plug a balance of payment deficits aggravated by the political and economic turmoil of the last 15 months, said Baker. Saudi Arabia is committed to provide Egypt with up to $ 2.7 billion in financial aid.

“Saudi Arabia has supported Egypt’s economy before by sending $ 500 million,” said Minister of Finance Ibrahim Al-Assaf while speaking during a conference for finance ministers of Gulf states in the Saudi capital last week. Saudi Arabia announced in April that it would deposit $1 billion in Egypt’s central bank and buy treasury bonds worth $750 million as part of a $2.7 billion package to support Egypt’s battered finances.

The $1 billion fund was deposited by the Kingdom after Saudi Ambassador to Egypt Ahmed Qattan arrived in Cairo to resume work. Qattan was recalled by Riyadh following demonstrations in front of the Saudi Embassy last month. Protesters were demanding the release of activist Ahmed El-Gezawi, who was recently arrested on his arrival in the Kingdom on charges of possessing intoxicants. – Arabnews