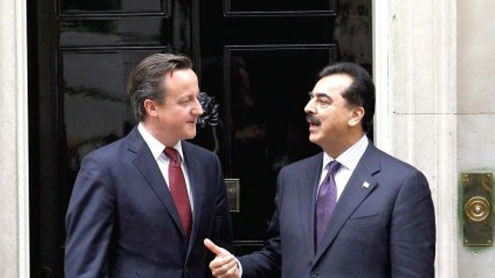 LONDON: Prime Minister Yousaf Raza Gilani and British Prime Minister David Cameron on Thursday launched a Trade and Investment Roadmap, setting out the steps both governments would take to promote investment, support business and achieve the target of increasing bilateral trade to 2.5 billion pound sterling by 2015.

The UK vowed to build on a deeper and stronger relationship with Pakistan, saying its future mattered greatly to Britain and agreed on building up ties in trade, defence, health and education sectors. Prime Minister Cameron categorically stated after a meeting with Prime Minister Gilani that the UK would be an enduring friend to the government and people of Pakistan.

“Both countries are committed to working together as equals to create the conditions for greater prosperity and security in Pakistan and the UK,” a joint statement issued at the end of the talks said. Gilani and Cameron discussed trade, economic growth and development, cultural co-operation, security and education at the 10 Downing Street and reviewed the progress being made since the two leaders made the commitment in April 2011 in Islamabad for a deeper and broader dialogue between the two countries.

The dialogue is aimed at strengthening friendship and promoting mutual prosperity and security. The two leaders also took into account the global economic crisis and agreed that it required both countries to make tough decisions to deliver future growth and prosperity. It was also agreed to have a regular dialogue between the governments on economic reform. Gilani and Cameron also discussed the shared national security challenges and the cooperation in counter-terrorism. They reviewed the outcome of the meeting of the Joint Working Group which met in October and the National Security Discussions between the civilian and military experts in this regard. Cameron acknowledged the huge sacrifices by the people of Pakistan and said the UK stood along Pakistan as a partner against the menace of militancy, terrorism and extremism.

Gilani said the UK and Pakistan enjoyed unique people-to-people links with over one million British citizens with close family ties to Pakistan. Prime Minister Gilani said Pakistan and the UK were bound together by longstanding ties based on shared history, values and rich people-to-people links. The joint statement issued after the First Annual Summit of the UK-Pakistan Enhanced Strategic Dialogue noted that since its launch in 2011 the dialogue between the UK and Pakistan has become deeper and broader.

The two prime ministers reviewed the practical co-operation on shared interests which had intensified across the five areas covered under dialogue; including trade, economic growth and development, cultural co-operation, security and education. Both prime ministers urged British companies to look at the opportunities the Pakistani market presented and build on the success of the over 100 UK-based companies already doing business in Pakistan. Gilani pledged his government’s full support in ensuring an enabling business environment to attract and sustain trade in Pakistan. He also expressed appreciation for the UK’s consistent support to Pakistan for enhanced market access to the European Union. He hoped that the UK would continue to support Pakistan’s request for GSP+ and early finalization of Autonomous Trade Preferences package.

Cameron assured UK’s continued support in this regard, and also encouraged Pakistani businesses to look at the opportunities the UK offered and its role as a gateway to Europe. Both prime ministers agreed to a continued close partnership to help lift millions of people out of poverty and build a stable, prosperous and democratic future for Pakistan. They committed to preventing illegal immigration, as it harmed people both in Pakistan and the UK. On security and defence, both Pakistan and the UK decided to work together to combat the menace of terrorism and extremism that threatened the people of both countries. – PT