Obama: ‘Americans are on our side’ on same-sex marriage 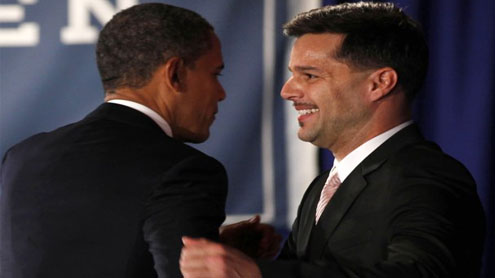 Scooping up dollars for his campaign at a New York fundraiser, President Barack Obama told supporters on Monday that “the American people are on our side” when it comes to issues like same-sex marriage.

The president spoke at an event hosted by openly gay singer Ricky Martin, the LGBT Leadership Council and the Futuro Fund, where he tied his announced support for gay marriage last week to past civil rights struggles.”We have never gone wrong when we expanded rights and responsibilities to everybody,” the president said to cheers from the audience. “That doesn’t weaken families, that strengthens families. It’s the right thing to do.”

His comments came after presumptive Republican nominee Mitt Romney told graduating students at Liberty University, a school founded by the late conservative televangelist Jerry Falwell, that marriage is between “one man and one woman.””The good news is, I think the American people are on our side on this,” Obama said at the New York event. Polls show that Americans are deeply divided on gay marriage. Younger Americans — a key part of the president’s history-making 2008 coalition — tend to be more supportive.

The embattled Democrat, his ambitions for a second term weighed down by the still-struggling economy, also took a turn as a slogan-writer of sorts for Romney and his fellow Republicans.”Their message is going to be very simple, you know what: ‘You’re frustrated, you’re dissatisfied and it’s Obama’s fault.’ You can boil down the message,” Obama said. “And they will spend hundreds of millions of dollars trying to drill that home. “Republicans have been pounding away at the president over stubbornly high unemployment rates and accusing him of making the recession longer and more painful with his policies.

Obama also warned his supporters not to be complacent.”Nobody should be taking this for granted. Especially when I come to New York, sometimes, you know, people go around and say, ‘I don’t know anybody who’s not supporting you, Barack.’ I say, ‘You live in Manhattan, man.’ This is going to be a challenging race, but we can win.” – Yahoonews