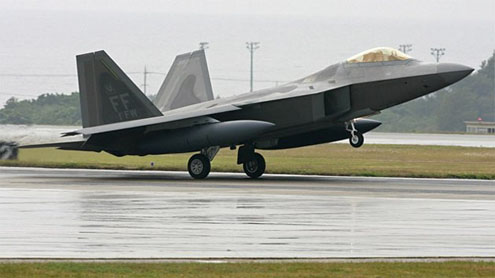 Defense Secretary Leon Panetta has demanded the Air Force take measures to make America’s most expensive fighter plane, the F-22 Raptor, safer for its pilots in light of an ongoing, potentially deadly problem with the plane’s oxygen system, a Pentagon spokesperson said today.

As a recent ABC News investigation found, for more than four years pilots for the F-22 Raptor have reported at least 25 incidents of experiencing “hypoxia-like symptoms” while at the controls of the $420 million-plus-a-pop jet. Hypoxia is caused by a lack of oxygen to the brain and is characterized by dizziness, confusion and disorientation.Among other precautions, Panetta ordered the Air Force to expedite the installation of an automatic emergency back-up oxygen system to the planes, spokesperson George Little told reporters.

Currently, pilots who believe they’re experiencing oxygen system problems have to manually reach for a ring in a cramped corner of the cockpit to activate the emergency back-up system. The activation ring itself was already such a problem that the Air Force recently re-designed it for the entire fleet to make it more accessible.In one fatal incident in November 2010, the Air Force said one of its pilots, Capt. Jeff Haney, had been too distracted by trying to activate the manual back-up system after a malfunction cut off his primary oxygen completely and he accidentally flew his plane into the ground.

One of two pilots who recently spoke out about the F-22’s dangerous problems on CBS News’ “60 Minutes” said that he once experienced such disorientation due to apparent hypoxia in mid-air that he struggled to even locate the manual emergency oxygen system.Panetta also ordered flight restrictions on the F-22 “effective immediately” that require it to stay relatively close to possible landing strips in case of emergency. In Alaska, the F-22 will no longer fly long-distance training missions, and instead those missions will be taken on by older F-15 and F-16 fighters, Air Force spokesperson Lt. Col. John Dorrian said. Panetta also directed the Air Force to provide him regular updates on the progress in the investigation into the planes’ problems.

Air Force Grounds Full $79 Billion Fleet, No Root Cause Found.Despite multiple investigations into the plane’s oxygen system and a grounding of the entire $79 billion fleet for nearly five months last year, the Air Force has been unable to determine the source of the problem. The Air Force admitted earlier this month that it was such a concern that a “very small number” of pilots requested not to fly or to leave the F-22 program altogether.

The Air Force has long maintained that the rate of incidents is exceedingly rare — 25 compared to the thousands of missions flown without incident — and has been working hard to determine what is wrong.The Air Force said in March it planned to implement an automatic emergency back-up oxygen system as one of 14 recommendations made by a scientific advisory board convened to investigate — ultimately unsuccessfully — the root cause of the hypoxia-like symptoms. Pentagon spokesperson Capt. John Kirby said the Secretary knows the Air Force is working hard but wanted to “add his muscle” to help find answers.Despite multiple forward deployments, none of the jets in the $79 billion fleet have ever flown a combat operation for the United States since going combat-ready in late 2005. – Yahoonews

‘X Factor’ may be singing “Oops!…” over Britney