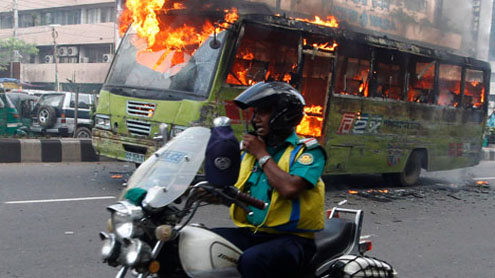 DHAKA: Demonstrators torched vehicles and fought police in the Bangladesh capital Dhaka after a court Wednesday denied bail to 33 opposition figures over charges stemming from an anti-government protest last month.

The main opposition Bangladesh Nationalist Party (BNP) called a nationwide general strike for Thursday, saying the court decision was “politically motivated” aimed at crushing “legitimate protests” over the disappearance of a BNP leader. “It’s totally unbelievable and a fabricated case. We are awestruck at the court’s decision not to grant bail to our top leaders,” BNP spokesman Nazrul Islam Khan told AFP, adding the charges against the men were bailable offences.

Protesters set ablaze vehicles and clashed with police outside the court. “We have arrested eight people over the torching of four buses and a taxicab,” city police spokesman Masud Ahmed said.Dozens were hurt when police fired rubber bullets at hundreds of demonstrators in the northwestern town of Thakurgaon after they went on a rampage to protest against the court decision, police superintendent Belayet Hossain told AFP.

State prosecutor Abdullah Abu told AFP the judge rejected the bail petition after the senior BNP officials surrendered to the court in the morning. “In all, 33 people, including BNP secretary-general Mirza Fakhrul Alamgir, were denied bail. The court ordered them into custody in jail instead,” he said.Alamgir, whose constituency is in Thakurgaon, is not a member of parliament but is the BNP’s second-highest-ranking official. Also among those held were lawmakers and nearly a dozen former ministers.

A total of 40 opposition activists from the BNP and its allies are now in custody awaiting trial on charges of torching a bus in front of the prime minister’s office during protests at the end of last month. During those protests, two small bombs exploded in the Secretariat, home to most ministries, and the cabinet office, where Prime Minister Sheikh Hasina holds weekly meetings. No one was hurt in the attacks.Bangladesh’s often turbulent politics have returned to near boiling point over the disappearance of the BNP’s regional head, Ilias Ali, on April 17.

The BNP fears Ali has been killed and accuses the elite Rapid Action Battalion security force of abducting him on government orders, an allegation that has been strongly denied. Police found Ali’s car abandoned in an upmarket district of Dhaka. His driver is also missing. Protests over the disappearance have regularly paralysed the country in recent weeks. Ali is the highest-profile opposition politician to have “disappeared” since Hasina took power in January 2009.

Quoting two Dhaka-based rights groups — Ain-O-Sailash Kendra and Odhikar — the New York-based Human Rights Watch has said the disappearance of least 22 people has been documented in 2012 alone and more than 50 people since 2010.