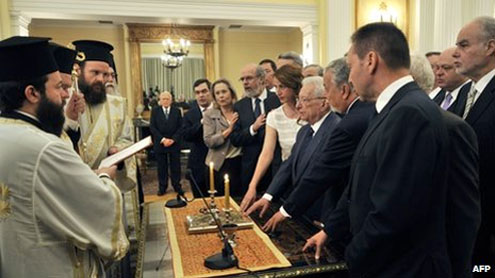 A cabinet of professors and diplomats has been sworn in in Greece to steer the debt-ridden eurozone state into repeat elections on 17 June.

Panagiotis Pikrammenos, the senior judge who has taken over as prime minister, said the cabinet’s sole task was to lead the country into the polls.The 300 MPs elected on 6 May are taking their seats for a single day.Voters punished the two mainstream parties which agreed the cuts required under international bailouts.A 130bn euro (£104bn; $165bn) bailout was agreed earlier this year, following a 2010 package of 110bn euros.

Fears that Greece may leave the eurozone are causing uncertainty about the monetary union’s future, despite attempts by politicians and bankers to play down the potential impact.reeks have been withdrawing their savings from banks, with nearly a third of deposits taken out in the first quarter of this year, Reuters news agency reports.At least 700m euros have left Greek banks since 7 May, President Karolos Papoulias told party leaders this week after being briefed by central bank governor George Provopoulos.

A leading German economist has suggested a Greek exit from the euro would be better for both Greece and the eurozone.Hans-Werner Sinn, head of the Munich-based Ifo institute, said that in order to stay in the euro, Athens would have to cut prices and wages by 30-40% to make its goods competitive, but could not do so because it would bring Greece to the “brink of civil war”.

“The Greeks must give up the euro as quickly as possible and reinstate the drachma,” he told the Rheinische Post.Greece returns to the polls in one month’s time and opinion polls suggest Syriza, a leftist bloc opposed to the cuts, will win the biggest share of the seats in the next parliament.

Giorgios Zannias, former head of the state’s council of economic advisers and a key debt negotiator, as finance minister

Petros Molyviatis as foreign minister, a post he held before from 2004-06

Antonios Manitakis, a professor of constitutional law, as interior minister

Greece’s two biggest mainstream parties, the New Democracy (ND) conservatives and Pasok socialists, both suffered at the 6 May polls, but ND still emerged as the biggest party.In tortuous negotiations last week, ND and Pasok failed to form a coalition government, and they have warned voters that anti-bailout policies will lead Greece out of the euro.”Two courses lie ahead… either to change everything in Greece – with changes which can be carried out in a Europe that is also changing – or to experience the terror of an exit from the euro, the terror of isolation outside Europe and the collapse of all we have built so far,” said ND head Antonis Samaras.

Syriza, which came a strong second at the elections and was also unable to form a coalition, argues Greece should remain in the eurozone but should not be expected to make “barbaric” cuts.Its leader, Alexis Tsipras, told BBC News on Wednesday: “Our choice is to stay in Europe without austerity policies.

“We are in favour of the euro without the austerity that is destroying it. We are convinced that if the austerity policies continue then the eurozone will be destroyed.”An opinion poll released by VPRC suggests Syriza will increase its share of the vote from 16.8% to 20.3% while ND’s share will drop from 18.9% to 14.2%, and Pasok’s from 13.1% to 10.9%.A recent poll by by Metron Analysis suggested a similar surge in support for Syriza and drop for Pasok, but suggested ND would retain its support at about 17.3%. – BBC