US commandoes rehearsed Abbottabad raid at ‘Camp Alpha’ in Bagram 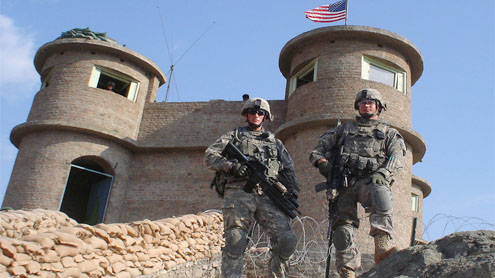 LONDON: The headquarters of the United States Department of Defence, Pentagon, has unveiled a precise scale model of Osama bin Laden’s Pakistan compound used to plan the Navy SEALs raid that ended in the al Qaeda chief being killed.

Wheeled out onto one of the Department of Defence headquarters hallways, the one inch to seven feet scale model is an exact replica of the Abbottabad building that the terrorist mastermind lived in for five years before his death in May 2011.Built in six weeks by the National Geospatial-Intelligence Agency and considered top secret until last week, the detailed recreation even contains a parked red van that intelligence officials often observed at the site.

Every tree, bush, door and fence is as it was prior to that May evening, created using satellite imagery, pictures from drones and actual CIA ground surveillance.“Nothing you see would have been included if we didn’t see it there,” said Greg Glewwe, who works with the National Geospatial-Intelligence Agency.To keep the entire model built from Styrofoam and acrylic as precise as possible, measurements were produced using a process called photogenic measurement, which uses shadows to work out specific heights.

“The mock-up was an instrumental device in planning the raid that killed Osama bin Laden,” said one unnamed US official involved with the planning and delivery of the US Navy SEALs raid to Fox News. Created months before the final go-ahead was given by US President Barack Obama, the model was first assessed by the CIA and other US intelligence agencies.The scale model was then presented to military officials such as Admiral Mike Mullen, then chairman of the Joint Chiefs of Staff, General James Cartwright, Mullen’s deputy, and Admiral William McCraven, head of Special Operations Command.

The model was used subsequently in the final preparations and planning for Operation Neptune Spear, the codename given to the helicopter-borne mission to kill Osama bin Laden.In addition to the smaller US-based model, the US Navy SEALs practiced at a one acre full-scale replica of the compound built at Bagram airbase in Afghanistan, known as Camp Alpha.The raid itself was completed shortly after 1am local time when bin Laden was shot once in the chest and once in the head by a US Navy SEALs who announced “for God and country Geronimo, Geronimo, Geronimo” because Geronimo was the codename given to the al Qaeda leader. The unveiling of the model came on the same day when US former defence secretary

Robert Gates said that he had doubts that bin Laden was in the compound.“We didn’t have one single piece of hard data that he was actually in that compound, not one,” said Gates to CBS this Morning co-host Charlie Rose. “The whole thing was a circumstantial case built by analysts at CIA. My view was, let’s kill him, but let’s use a missile of some kind.” – Dailytimes