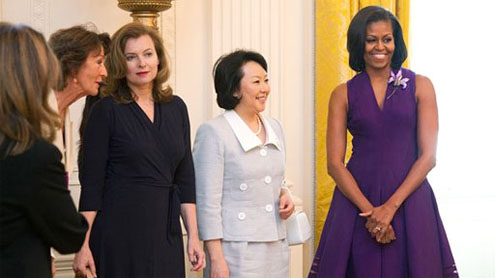 Catered by celebrity chef Jose Andres, the G-8 spouses gathered for an “intimate lunch,” according to the White House.On the menu: gazpacho, Maryland rockfish with asparagus, grapefruit, Virginia berries, greens from the White House garden and caramelized olive oil. And for dessert, a tangerine sorbet with Virginia strawberries.There were some new faces this year including Elsa Antonioli Monti, married to the new Italian Prime Minister Mario Monti, and notably, Valerie Trierweiler, French President Francois Hollande’s girlfriend.

Trierweiler, who has been with Hollande since 2005, is pushing diplomatic etiquette and was seen standing by Hollande’s side when he was sworn in earlier this month.With the French first couple now in the United States for a marathon weekend of soft diplomacy, American media has been tripping over itself to describe Trierweiler: Girlfriend? Spouse? Domestic partner? Lover?Trierweiler skipped lunch on Friday between Hollande and Secretary of State Hillary Clinton, but is reportedly invited to participate in all spouse programs for the G-8 and NATO Summit in Chicago.

The beautiful, twice divorced, mother of three is accomplished in her own right. She earned a masters from La Sorbonne in political science, and she was a successful political journalist, though she has been forced to take a step back since Hollande’s election.Unsurprisingly, the only spouse to skip today’s intimate gathering was German Chancellor Angela Merkel’s husband, Joachim Sauer, a professor of theoretical chemistry in Berlin. Sauer rarely makes public appearances with his wife. He missed her inauguration in 2005 and can only occasionally be found in photos, generally standing off.

Before lunch today, the women toured the White House with curator Bill Allman, stopping in the East Room and State Dining Room.Tonight, after the G-8 wraps up at Camp David, the first lady will travel to Chicago for the NATO Summit and will host events for the spouses of NATO leaders, including dinner at the Art Institute of Chicago. – Yahoonews