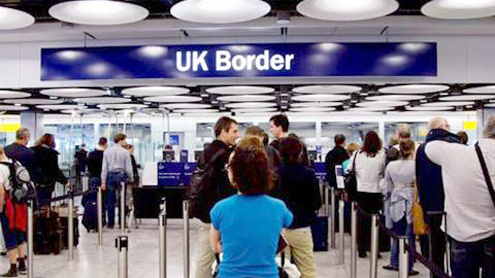 A Coalition crackdown on immigration risks deterring legitimate foreign students and robbing the country of billions of pounds worth of investment, universities warn today.

The heads of universities across Britain suggest that a toughening up of rules surrounding student visas may drive bright applicants towards institutions in other countries. In a letter to David Cameron, they call on the Government to remove university students from net migration figures to help drive the economy and boost university income. It follows fears that students are being unfairly targeted as part of a Coalition drive to cut overall levels of immigration. The letter has been signed by 68 chancellors, governors and university presidents, including those representing a number of elite Russell Group institutions, such as Birmingham, Nottingham, Manchester, Warwick, Leeds, York, University College London and the London School of Economics.

Signatories include Sir Richard Lambert, former head of the Confederation of British Industry and chancellor of Warwick, Lord Bragg, the broadcaster and Leeds chancellor, and the former BBC director-general Greg Dyke, the chancellor of York. It has also been signed by Sir Menzies Campbell, the former Lib Dem leader and St Andrews chancellor, Baroness Bottomley, the former Conservative cabinet minister and chancellor of Hull, and Lord Tugendhat, the Tory peer and chancellor of Bath University.  The letter – circulated by Universities UK – says that Britain currently attracts around one-in-10 foreign undergraduates and postgraduates who study outside their home country. This generates around £8bn a year for the nation in tuition fees and other investment, it is claimed, with the total expected to more than double by 2025. But UUK told the Telegraph that many risked being pushed to other countries such as the United States, Australia, Canada and Germany.
Today’s letter says: “In this Olympic year, when our universities will be hosting athletics teams and media from across the globe, we urge you to send a clear message that genuine international students are also welcome in, and valued by, the United Kingdom.”

Figures published last week showed that annual net migration to Britain currently stands at a record high of 250,000 a year. But the Government has pledged to cut the total to below 100,000. Currently, university students are counted towards the figures and it is feared that ministers can only achieve the goal by targeting legitimate undergraduates and postgraduates. In particular, universities are concerned at a series of changes to the student visa system that they claim are accumulating to deter foreigners from studying in Britain. This includes banning students from remaining in the country after graduating unless they earn at least £20,000 in a skilled job, preventing them from taking degrees or MAs that last for more than five years, requiring them to provide evidence of progression through their course and cracking down on dependents. They claim some universities have already seen the number of applications from India drop by a third this year. Nicola Dandridge, UUK chief executive, said that the “cumulative effect of all these changes is to present a picture of the UK as not welcoming international students”.

“As competitor countries start to introduce visa changes to attract more international students and academics, we have real concerns about the situation in the long term,” she said. “Although the UK continues to have one of the strongest higher education systems in the world, in recent years, we have already started losing market share in the face of growing competition globally. “The reality is that countries such as the US and Australia are taking active steps to encourage international students and are communicating a very different message…. It is clear that international students at universities should not be treated as permanent migrants, since the vast majority of them leave the UK at the end of their studies.” The letter to the Prime Minister welcomes the government’s move to improve border controls and “counter any abuse of the student visa route”. Since the Coalition came to power ministers have launched a crackdown on bogus language colleges suspected of allowing hundreds of thousands of economic migrants into Britain.

However, universities fear they may not be able to take advantage of what they believe is a growing market. As well as bringing in money “international students also play an important role in towns and cities up and down the country and contribute significantly to local economies” the letter states.  They “also bring significant cultural richenss and long-term political and social benefits to this country, and return many benefits to the countries which they come from,” the universities write.  However, they warn they face increasing competition from a number of other countries to attract them. To address this the letter calls on the Government to stop counting foreign university students as migrants – as some other competing countries do. “Global competition for international students is intense and a number of other countries are increasing their efforts in this area,” it says.

“We therefore ask you to consider how your government can do more to support our universities in their international activities. In particular we request that international university students be removed from the net migration statistics for policy purposes, bringing us into line with our major competitors. “We believe this would help government by creating a clear differentitaion between temporary and permanent migration, help universities whose international character is essential to their future success, and help the UK by contributing to economic growth.” A recent report from the National Audit Office found that between 40,000 and 50,000 people illegally gained access to Britain after a new visa system was introduced in 2009.
-telegraph