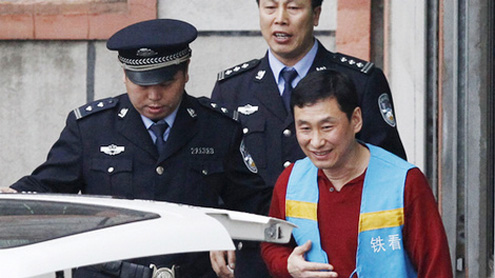 Two ex-heads of China’s football league have been jailed for 10-and-a-half years each for corruption, making them the most senior football officials sentenced.

Nan Yong and his predecessor Xie Yalong were both accused of accepting bribes. Nan was also fined 200,000 yuan ($31,400; £20,200) and Xie is set to have personal assets and illegal takings confiscated.  China has increased efforts to clean up the game, hit by a series of scandals.  Nan, charged with 17 counts of taking bribes, was sentenced by a court in Tieling in north-eastern China. Xie, who was sentenced in Dandong, denies the charges against him adding that he only confessed to the allegations under torture.

More than 900,000 yuan in personal assets and illegal takings of his are set to be confiscated. Several other verdicts have also been delivered in similar cases in other cities, Chinese media reported. In Dandong, a former national team captain was also sentenced to 10 years and six months in jail and fined 200,000 yuan. Four former national team players were sentenced in Shenyang for to up to six years’ jail and fined 500,000 yuan for taking bribes and match fixing.

For long suffering Chinese football fans, the latest convictions further underline what they already knew – that the corruption in Chinese football has been deep and blatant, says the BBC’s John Sudworth in Shanghai. There are stories of defenders taking shots at their own goal and of whole teams refusing to play. But this year China is sending a clear message that it is cleaning up its act. Dozens of people – referees, players, officials and coaches – have been arrested following a campaign to reform the sport, launched in 2009.

Referee Lu Jun, who officiated at the World Cup, was jailed in February for receiving more than $128,000 in bribes to fix the results of seven football league games.  Some commentators have suggested that there could be a bigger political agenda at work.  Xi Jinping, the man widely tipped to become China’s next president is reported to have set his sight on an international footballing trophy.  Cleaning up corruption, coupled with the drive to bring expensive foreign talent into the game, could help raise standards, says our correspondent, although most Chinese fans would probably agree that a World Cup win is still a long way off.  -BBC