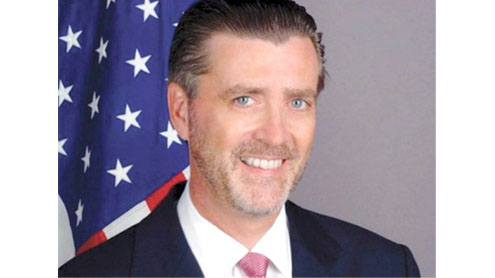 WASHINGTON: In approximately a month’s time, US Ambassador to Pakistan Cameron Munter will step down from the position he has held for nearly two years.

His tenure has been marked by incidents that have deteriorated relations between Pakistan and the US: an increase in drone strikes, the Raymond Davis incident, the Osama bin Laden raid and the Salala incursion — resulting in a trust deficit between both countries.The only name that has been floating in US media reports has been of Richard Olson, who was most recently posted in the US embassy in Kabul. As of earlier this month, Ambassador Olson was listed as the assistant ambassador at the US embassy in Afghanistan and the coordinating director for development and economic affairs.

His bio has been recently removed from the Kabul embassy’s website, and a replacement has been announced for the post he had held. A State Department spokesperson confirmed to The Express Tribune that Olson has left his post this month. According to his bio, he had previously served in Iraq, UAE and Saudi Arabia.Shamila Chaudhry, former White House national security council and director for Af-Pak, told The Express Tribune, that the new ambassador will have to balance two major needs: stabilising Pakistan-US relations, and support the US drawdown efforts in Afghanistan, which have suffered due to the closure of Nato supply routes in November of last year.

Chaudhry said that the next ambassador will face difficulties specifically in pursuing counterterrorism goals that help the US in Afghanistan, while also promoting public diplomacy, development and economic growth goals in Pakistan.Wendy Chamberlin, a former US ambassador to Pakistan, told The Express Tribune that some of the key challenges that the new ambassador will face is not just to explain what America is thinking for the Pakistani people, but also explain Pakistan to Washington. – Thetribune