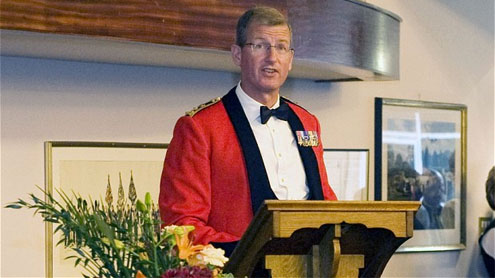 Brig David Paterson says in a letter to Gen Sir Peter Wall, the Chief of the General Staff (CGS), seen by The Media, that the proposed abolition of 2nd Bn Royal Regiment of Fusiliers will not stand up to public scrutiny.

The move will be announced on Thursday as part of a substantial cull of the Army. At least five infantry battalions and a third of the Royal Artillery and Royal Logistic Corps will be cut as the Army loses 12,000 personnel, in addition to the 7,000 recently sacked, and shrinks by a fifth to 82,000 men. It will almost halve the number of infantry serving in the Royal Regiment of Fusiliers from about 1,100 soldiers to 600.

Members of the axed battalion face redundancy or a move to other units. Brig Paterson – the honorary Colonel of the Regiment of Fusiliers – says the decision will not “best serve” the Armed Forces and “cannot be presented as the best or most sensible military option”. Disclosure of the document comes after a number of disillusioned senior officers have left in recent months.

In the letter, Brig Paterson tells Gen Sir Peter that he is “bitterly disappointed” at the decision to cut a battalion that is “the strongest in raw manning and deployable strength”. Philip Hammond, the Defence Secretary, has previously suggested that regiments having difficulty recruiting would be most vulnerable. But figures show 2 RRF has 523 trained men out of a maximum strength of 532.Brig Paterson adds: “I, as Colonel, have the duty to tell my men why it is their battalion, which at the time of the announcement will be the best manned battalion in the Army, with recruits waiting in the wings, was chosen by CGS. I will then also have to explain to my Fusiliers in a fully manned battalion why they are likely to be posted to battalions that cannot recruit. This will not be an easy sell.”

The Fusiliers can boast 20 Victoria Crosses, including six awarded “before breakfast” at Gallipoli in 1915. In the First World War, they contributed more battalions than any other regiment and they have fought with distinction in nearly every conflict since the Second World War, including Iraq in 1991 and 2003.But the regiment will “wither on the vine” Brig Paterson warns, if it shrinks to a single battalion.

In his letter, written last month, he adds: “I would not want you to have even the slightest impression that I am challenging your orders.” But he concludes: “If challenged or scrutinised by, for example the media, it cannot be presented as the best or most sensible military option.”

The letter criticises the decision not to create a “super regiment” comprising two battalions each of Fusiliers, Royal Anglians and Princess of Wales’s Royal Regiment, allowing greater opportunities for promotion and adequate numbers for missions. Brig Paterson warns that operations could be undermined, as reducing the Fusiliers to one battalion “fails to meet the criteria of sustainability and operational capability” set out under the MoD’s plans.

There are also suspicions – not outlined in the letter – that English regiments will be sacrificed in favour of Scottish units as the independence referendum looms.Brig Paterson, who is also chief of training for the Allied Rapid Reaction Corps, says that his soldiers and the MPs who represent them will “undoubtedly want to see the detailed data and reasoning” behind the cut. Regiments will have just 24 hours’ notice before Thursday’s announcement, the letter discloses. “This is not long enough for my commanding officers to brief their men and cannot be right,” it says.

Members of 2 RRF will almost certainly be on the front line in Afghanistan when disbandment takes effect, expected to be within a year. The unit deploys to Cyprus later this summer to act as the Theatre Reserve Battalion for two years.“They must not be expected to disband from Cyprus with all the inherent difficulties of schooling for children, housing and other welfare issues,” the letter says.An MoD spokesman said yesterday: “We don’t comment on leaked documents. The CGS has held a number of discussions about the restructuring of the Army with senior officers.“We have always been clear that more than one set of criteria is used in determining the future shape of the Army as it is restructured to become an integrated regular and reserve force by 2020.”