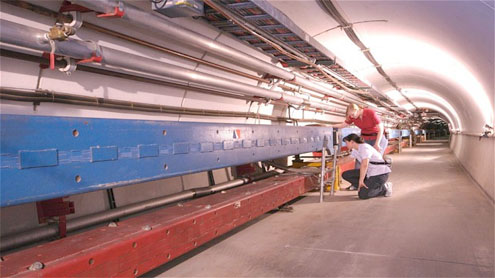 Results from the US Tevatron, a smaller cousin of Cern’s Large Hadron Collider, “strongly point” towards the existence of a Higgs Boson, scientists said.

Telltale signals which could indicate the Higgs were identified within the same search region where the LHC identified promising “hints” of the particle last December.Although the Tevatron’s results are nowhere near strong enough to qualify as a discovery, they will fuel growing speculation that LHC scientists are set to make a conclusive announcement on the particle’s existence on Wednesday.

Because the Tevatron and LHC use very different methods of searching for the Higgs Boson, the fact that their signals match up greatly reduces the chance that either could have happened by chance.Prof Dan Tovey, Professor of Particle Physics at the University of Sheffield, said: “These intriguing hints from the Tevatron appear to support the results from the LHC shown at CERN in December.

“This gives us more confidence that what we are seeing is really evidence of new physics rather than just a statistical fluke. We will need to wait until Wednesday and the latest results from the LHC before getting the full picture however.”The Higgs Boson is the most sought-after prize in particle physics, representing a crucial missing piece of evidence for the Standard Model, the most widely accepted theory on how the Universe works.

Finding the particle, first proposed by Peter Higgs in 1964, would prove the existence of the Higgs Field, a mysterious force which interacts with particles to give them their mass.The LHC is heavily tipped to announce the discovery of a standard model Higgs Boson – or something else matching its description – on Wednesday when it reveals its latest batch of results.

If Wednesday’s results are definitive, the data from the Tevatron and LHC will be reanalysed to characterise it more precisely and establish exactly what has been found.The Tevatron findings represent a final analysis of all the data gathered by scientists at Fermilab before the particle accelerator was shut down late last year.They show a signal of the Higgs with a mass of between 115 and 135 Gigaelectronvolts (GeV), which fits with the “hints” at a mass of 125 GeV announced by the LHC last December.

The Tevatron signal had a statistical strength of 2.9 sigma, meaning there is roughly a one in 550 chance that the result was a statistical fluke.Rob Roser, co-spokesperson for the CDF experiment, one of two teams searching for the Higgs at the Tevatron, said: “Our data strongly point toward the existence of the Higgs boson, but it will take results from the experiments at the Large Hadron Collider in Europe to establish a discovery.”

Dmitri Denisov, co-spokesperson for the other experiment, named DZero, said: “We achieved a critical step in the search for the Higgs boson.“While 5-sigma significance is required for a discovery, it seems unlikely that the Tevatron collisions mimicked a Higgs signal. Nobody expected the Tevatron to get this far when it was built in the 1980s.” – Thetelegraph