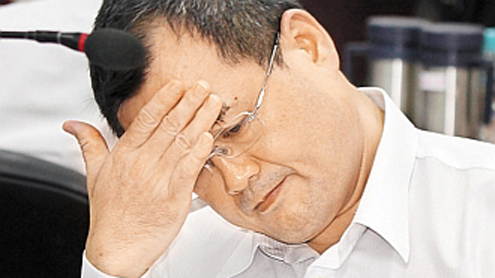 TAIPEI: A top official in Taiwan’s cabinet facing a corruption probe admitted Monday to taking millions of dollars in bribes from a wealthy businessman, his lawyer and legal officials said.

Lin Yi-shih, who resigned as the cabinet secretary-general last week, confessed after being interrogated by prosecutors overnight, backing down from initial claims that the graft allegations amounted to a political setup.  “Lin has admitted wrongdoing and said he felt he had let down his family, his superiors and the general public,” his lawyer Lai Su-ru told reporters after Lin’s marathon questioning.  Observers said the case could deal a heavy blow to the government of President Ma Ying-jeou, who was re-elected for a second term this year pledging to fight corruption after his predecessor Chen Shui-bian was implicated in several graft cases.  Taiwan has been rocked by a string of high-profile corruption cases involving top officials, prompting the Ma government to set up a special anti-corruption body last year.

The prosecutors asked a court Monday to open a session to decide if Lin, 42, should be arrested and taken into custody. “We’ve asked the Taipei district court to detain Lin immediately and we fear that if (he) was left free, he might collaborate with others and destroy evidence,” prosecutor Chen Hung-ta said. The prosecutors started the investigation last week after the weekly magazine Next reported Lin had allegedly taken Tw$63 million ($2.1 million) from a businessman in 2010 to help him gain a contract with a state firm. Lin was also accused of soliciting another bribe of Tw$83 million this year from the same businessman, who refused and took the story to the media.-Dailytimes