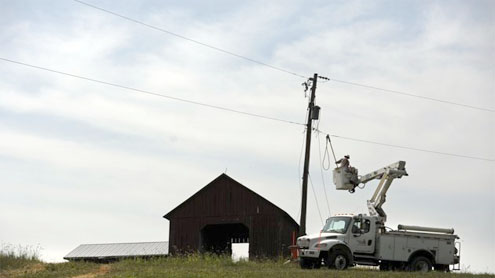 power outage problems in US

WASHINGTON: In the aftermath of violent storms that knocked out power to millions from the Midwest to the Mid-Atlantic , sweltering residents and elected officials are demanding to know why it’s taking so long to restring power lines and why they’re not more resilient in the first place.

The answer, it turns out, is complicated: Above-ground lines are vulnerable to lashing winds and falling trees, but relocating them underground involves huge costs — as much as $15 million per mile of buried line — and that gets passed onto consumers.

With memories of other extended outages fresh in the minds of many of the 1.07 million customers who still lacked electricity late Tuesday, some question whether the delivery of power is more precarious than it used to be. The storms that began Friday knocked out power to 3 million and have been responsible for the deaths of 24 people in seven states and the District of Columbia, including a utility contractor who fell to his death Monday in Garrett County, Md.

“It’s a system that from an infrastructure point of view is beginning to age, has been aging,” said Gregory Reed, a professor of electric power engineering at the University of Pittsburgh. “We haven’t expanded and modernized the bulk of the transmission and distribution network.”The powerful winds that whipped through several states late Friday, toppling trees onto power lines and knocking out transmission towers and electrical substations, have renewed debate about whether to bury lines. District of Columbia Mayor Vincent Gray was among officials calling for the change this week and was seeking to meet with the chief executive of Pepco, the city’s dominant utility, to discuss what he called a slow and frustrating response.

“They obviously need to invest more in preparing for getting the power back on,” said Maryland state Sen. James Rosapepe, who is among those advocating for moving lines underground. “Every time this happens, they say they’re shocked — shocked that it rained or snowed or it was hot — which isn’t an acceptable excuse given that we all know about climate change.”Though the newest communities do bury their power lines, many older ones have found that it’s too expensive to replace existing networks.

To bury power lines, utilities need to take over city streets so they can cut trenches into the asphalt, lay down plastic conduits and then the power lines. Manholes must be created to connect the lines together. The overall cost is between $5 million and $15 million per mile, according to the Electric Power Research Institute, Inc., a nonprofit research and development group funded by electric utilities. Those costs get passed on to residents in the form of higher electric bills, making the idea unpalatable for many communities.

Power lines are already underground in parts of Washington, but initial estimates are that it would cost as much as $5.8 billion to bury them throughout the entire city and would cost customers an additional $107 per month, said Michael Maxwell, Pepco’s vice president of asset management.North Carolina considered burying its lines in 2003, after a winter storm knocked out power to 2 million utility customers. The North Carolina Public Staff Utilities Commission eventually concluded it was “prohibitively expensive” and time-consuming. The project would have cost $41 billion and taken 25 years to complete — and it would have raised residential electric bills by 125 percent.

An onslaught of recent extreme weather around the country, including heat waves, wildfires and flooding, has increased strain on infrastructure already struggling to meet growing consumer demand. And some scientists predict the severe weather will only increase, though it will take time to study this year’s weather before any conclusions can be drawn.

Pepco has contingency plans for dealing with severe weather like tornadoes and hurricanes and runs periodic drills in which staff go through the process of responding to mass outages. In this case, though, the hurricane-force winds lashed the region with no advance notice, creating a type of quick-hit storm that caught the utility flat-footed and for which it had not practiced, Maxwell said.

“That’s going to be a very big lesson for us,” he said. “We need to understand how we recover from this.”A stress index created by the North American Electric Reliability Corp., which monitors the country’s power supply to annually assess its performance, shows that day-to-day performance seems to have improved, but there was an increase in high-stress days. The company counted six high-stress days in 2011, slightly more than the three preceding years. Weather was a contributing factor in nine of the 10 failures severe enough to generate a federally required report in 2011.

But utility insiders acknowledge that the math is little comfort when a customer’s air conditioner fails during a triple-digit heat wave and the food spoils.”The industry is getting better and better,” said Aaron Strickland, who oversees distribution and emergency operations for Georgia Power, a subsidiary of the Atlanta-based Southern Co. “In my opinion, I think the expectations of customers are higher and higher because we depend so much on electricity. … We expect to push that button and it works.”

Still, he noted Friday’s storms pummeled the region with no advance warning, and “you can’t prepare for that.””You don’t see it coming,” Strickland said. “It just happens.”Seth Blumsack, an assistant professor of energy policy and economics at Penn State, said utilities are making investments in transmission upgrades but “it doesn’t look like blackouts are getting any less common.””Some studies have suggested that they are getting more common,” he said. “Some studies have suggested that they’re happening at basically the same rate as they used to.”

Though the country’s power infrastructure is reliable, it was mostly built between the 1930s and 1970s and is starting to age, said Reed of the University of Pittsburgh.Bruce Wollenberg, a professor of electrical and computer engineering at the University of Minnesota who specializes in power systems, said it’s hard to tell if extended outages are more common than in years past. But the capacity for high-voltage transmission systems has not increased with demand, he said, in part because of the cost of moving power lines underground and the general distaste for having above-ground lines right outside homes.

“People don’t want power lines — period …They don’t like the way they look, they don’t like a lot of things,” Wollenberg said. “It’s universal across the country, and I think across the world. People don’t want power lines. They don’t want more power lines.”Residents’ complaints about the latest outages have increased with their duration.Kevin Fogg, a barber from the rural community of Jefferson, about 45 miles northwest of Washington, scoffed when asked if he’d be willing to pay Potomac Edison higher rates to prevent more outages like the one he’s been suffering through.

“I think it’s more than it should be already,” Fogg said.He said the utility company should do a better job of trimming trees and branches that threaten power lines.”There’s a huge, dead tree hanging over our line and they said, ‘Well, we’re not going to cut it down,'” Fogg said. “It’s got to break first and knock the power line down before they’ll do anything about it. So I guess they won’t do any preventive maintenance — or at least not as much as they should.”Jean Cuseo, a middle-school art teacher from Jefferson, said she’s not sure if she’d be willing to pay more to prevent outages, even if that were an option.”I’m pretty environmentally friendly. If I could live off the grid I would,” she said. – Yahoonews