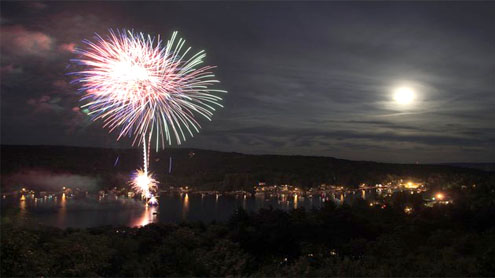 Fourth of July fireworks are set off on Lake Winnipesaukee

MOUNT VERNON, Va: George Washington never had air conditioning, but he knew how to keep cool: a mansion with lots of windows elevated on the banks of a wide, rolling river and lots of ice cream, maybe with a little brandy.

It was a little like the old days without electricity Wednesday, as the nation’s capital region celebrated Independence Day the better part of a week into a widespread blackout that left millions of residents sweltering in 90-plus degree heat without air conditioning. Utilities have slowly been restoring service knocked out by a freak storm Friday from the Midwest to the Mid-Atlantic, and at least 26 people have died in the storm or its aftermath.

At George Washington’s Mount Vernon estate, one of the most popular Fourth of July attractions was a demonstration of 18th-century ice cream making, one of Washington’s favorite desserts. Historical interpreters Gail Cassidy and Anette Ahrens showed the crowds how cocoa beans were roasted and ground into a paste for chocolate ice cream, made using ice hauled up in massive blocks from the Potomac River and stored underground to last as long into the summer as possible.

As for beverages, Washington was no stranger to alcohol, enjoying imported Madeira wine from Portugal, distilling his own whiskey and enjoying a fruity brandy cocktail called Cherry Bounce.Washington was his own architect at Mount Vernon, “and he was very good at it,” said Dennis Pogue, associate director for preservation at Mount Vernon. The piazza, which runs the length of the mansion, is “kind of California living in the 18th century,” Pogue said.

The location, atop a sloping hill along the Potomac, catches cool breezes. Lots of windows and shutters allow for the regulation of sun and wind. And the distinctive cupola on the mansion roof serves as the mansion’s air conditioning unit, funneling hot air out the top and drawing cooler air in at the ground level.Visitors on Wednesday gathered on the mansion’s back porch, a piazza overlooking the Potomac where breezes rolled through.

“It feels good out here. It’s the same thing we do in Texas,” said Chris Moore of Austin, Texas, sitting with his wife, Dina. The two had come to Virginia to see their son graduate from officer training at The Basic School at Quantico Marine Corps Base.Moore said he opted for the smaller crowds at Mount Vernon as opposed to the massive Fourth of July Celebration on the National Mall because it afforded a better place to relax and contemplate the founding of the nation, especially since Mount Vernon on Wednesday hosted a naturalization ceremony for 100 new citizens from 47 different countries.

“This place is incredible. It’s just the kind of place that people need to see,” he said, noting the divided nature of the country’s current politics. “We all need to step back and look at where we started.”Up the river in Washington, President Barack Obama also attended a naturalization ceremony at the White House, this one for active service members from 17 countries. Military families were invited for a barbecue and to watch fireworks on the South Lawn.

Obama said the varied backgrounds of those taking the oath typified America’s long tradition of welcoming immigrants from around the world to its shores.”Unless you are one of the first Americans, a native American, we are all descended from folks who came from somewhere else,” he said. “The story of immigrants in America isn’t a story of them. It’s a story of us.”Presumptive GOP presidential candidate Mitt Romney has spent most of the week off the campaign trail with his family in in Wolfeboro, N.H., but took time Wednesday to march in the town’s Fourth of July parade.

In New York, about a dozen disabled soldiers — most triple or quadruple amputees — visited ground zero ahead of the usual throng of tourists. The visit was intended to salute service members who survived the post-9/11 wars to become miracles of modern medicine, and to promote two charities raising money for homes custom-built to ease their burdens.On Coney Island, Joey Chestnut ate his way to a sixth straight win at the Fourth of July hot dog eating contest, tying his personal best in a sweaty, gag-inducing spectacle. The 28-year-old nicknamed “Jaws” scarfed down 68 hot dogs in 10 minutes in the sweltering summer heat to take home $10,000 and the mustard-yellow belt.

The city’s celebration was expected to capped with the Macy’s 4th of July Fireworks show off Manhattan later in the night, with 40,000 aerial shells will be launched from five barges.Many Americans abandoned their holiday plans after going without power from violent storms that hit Friday across the Mid-Atlantic and Midwest.Jeanette Oliver had planned to have her relatives over to her Vineland, N.J., home, but the ongoing power outage forced her to change those plans on the fly this week.

“They had been saying most people would have (electrical) service back by Wednesday, but we didn’t want to risk having a big party in a home where you couldn’t turn on the air conditioning, you couldn’t turn on a TV or a computer,” Oliver said outside a supermarket early Wednesday. “Several people in our family are elderly, and you don’t want them suffering with the heat and being uncomfortable.”

Sarah Lenkay and her roommates, who lost power in Columbus, Ohio, Friday evening, didn’t have power back until around midnight Wednesday. They weren’t too excited about the holiday, because the last few days have been so miserable.”I’m just enjoying the comfort of my home right now, and cleaning and getting things in order,” she said. “So I’m not really doing much. It feels great.” – Yahoonews