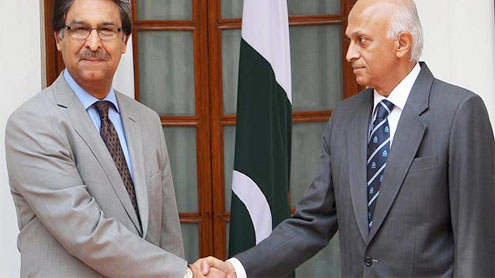 NEW DELHI: India and Pakistan held a first round of foreign secretary-level talks here on Wednesday, and sources close to the discussions said they had progressed on a positive trajectory, contrary to gloomy projections made by the media.

Indian Foreign Secretary Ranjan Mathai and his Pakistani counterpart Jalil Abbas Jilani met just days after the arrest of a key suspect in the attacks on Mumbai. The issue of terrorism did figure in Wednesday’s meeting and is expected to find reference together with all the key topics discussed between the two countries in a joint statement to be issued after a final round of parleys on Thursday.

Confidence-building measures including Pakistan’s proposal to shift heavy weaponry away from the Line of Control were discussed as was the larger issue of a political settlement of the Kashmir dispute. Notifications of nuclear accidents and related emergencies were discussed in the wake of the Fukushima disaster, sources said.They said an indication that all was well between the two sides was evident from the fact that there was no acrimony over the drafting of the statement which was almost ready, an unusual occurrence between the two.

Mr Mathai who attended a dinner hosted by Pakistan’s new envoy Salman Bashir praised the high commissioner for quickly facilitating what he said were important discussions involving two significant delegations. Mr Mathai said his mandate was an old one – to seek stable and strong ties with Pakistan. Mr Jilani said he was heartened by the positive tenor of the talks that dovetailed with the desire of the entire range of Pakistan’s leadership to improve ties with India.

Outside the precincts of Pakistan House, where Liaquat Ali Khan once lived and which now works as the sprawling residence of Pakistan’s high commissioner, the Indian media was highlighting the arrest of Abu Jundal, an alleged Indian mastermind who was deported from Saudi Arabia with a Pakistani passport. Pakistan has asked for more details in the case in order to assist with India’s quest to fix responsibility.

The suspect told Indian investigators that officials from Pakistan’s intelligence agency were present in a control room in Karachi while he and others directed attackers on the ground in Mumbai.Last month, India and Pakistan held inconclusive talks on resolving long-standing disputes over the Siachen Glacier and the Sir Creek maritime boundary.

This week’s two-day meeting is expected to prepare the agenda for talks between the countries’ foreign ministers. A date for that meeting has not been announced. A joint press conference on Thursday is expected to throw light on this.Wednesday’s talks focussed on peace and security, including the threat posed by terrorism, the decades-old dispute over the Kashmir and confidence-building measures to push closer ties, an Indian official said. – Dawn