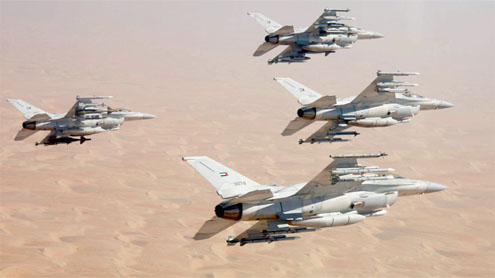 Fighter Jets of the UAE and Bahrain returned to their hangars on Wednesday after participating in successful joint air drills codenamed ‘Falcons Union 1/2012’.

The Air Force and air defence units of the UAE and Royal Air Force of Bahrain carried out the exercise as part of a strategy to enhance cooperation, coordination and exchange of experiences and military information.The exercise entailed several joint defence scenarios, in addition to practical applications, tactical manoeuvres, joint air operations, command and control and fire support.

The exercise comes as part of the joint military cooperation between the GCC armed forces to upgrade operational planning capabilities, to improve skills and to enhance combat readiness among different units of the armed forces.  The joint drill also put into practice the concept of cohesion and convergence of the defence capabilities of GCC states to gain more field experience and combat capability. The allies displayed their readiness and joint air firepower in war situations.

“The joint exercise between the two fraternal countries is not linked to any developments on the regional or international plateaus,” said Deputy Commander of the UAE Air Force and Air Defence Major-General Pilot Ibrahim Nasser Mohammed Al Alawi.He added that the squadrons carried out a series of exercises which successfully highlighted the precision of concerted work and cooperation of all elements involved. – Khaleejnews